The people of the South West Region of Cameroon celebrate the installation of the new Governor, BENARD OKALIA BILAI under the patronage of H.E Minister of Territorial Administration and Decentralization, RENE EMMANUEL SADI. The installation took place on Thursday at the Bongo Square ceremonial ground in Buea. 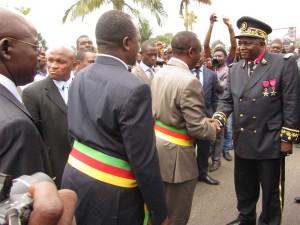 Mr. Benard Okalia Bilai has served the government in many administrative portfolios, 1st Assistant D.O for Mongo in Douala, SDO for Mbila in Ebolowa, SDO for Mezam in Bamenda, SDO for Fako just to name a few, and now Governor of the South West Region of Cameroon.

Speaking at the occasion the mayor for Buea, Mbella Moki Charles outlined the importance of South west Region in Cameroon history: Buea, the capital of the then Southern Cameroon, a harbor for oil fields in the country, a region with rich cultural diversity, and a region with high touristic values. He acknowledged the great works of the out going Governor and to the incoming he assured him of the willingness of the people to work with him.

He then drew the attention of the newly installed governor to some of the problems of the South West Region. Amongst which he cited the crime rate in the South West Region especially in Kumba; the need to wipe out the notorious bike riders at the urban centers to make it more peaceful, and above all, the bad roads in the south west region of the country.

Then spoke the Minister of Territorial Administration and Decentralization who thanked the people of the S.W.Region for their hospitality. He urged the Governor to follow up for the realization of road construction projects like the Mamfe –kumba –Ekondo Titi road, Mamfe-Ekok and Mamfe –Bamenda road. And to the South West population he urged them to remain true to the nation. 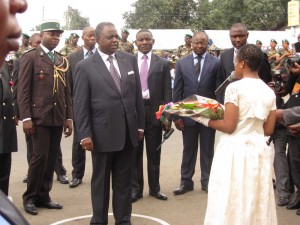 The minister read out the bibliography of the governor, who has served in Limbe, and it was enlighten because it was a “come back home” for him. Then minister declared the Governor installed and he greeted one on one by other governors present and a host of other administrators.

The Occasion was graced by military match pass by the ARMY, GENDERMS, POLICE, WODERS and Traditional Dance groups. 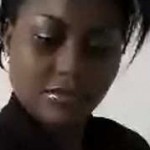