The government of Cameroon via the Ministry of Agriculture & Rural Development, MINADER, have resolved to take Cameroon’s agricultural sector to another level. This is the motivation of an MOU signed between MINADER and the Institute of Agricultural Research for Development , IRAD, at the Ekona Centre recently.

According to the MINADER Boss, Lazare Essimi Menye, the MOU is significant and will go ahead to revitalise Cameroon’s second generation of agriculture. “It is time to move ahead with Cameroon’s agricultural policy by bringing in innovations and the latest technology. Thanks to IRAD, the will be mass production of planting materials using tissue culture techniques in the Ekona Centre. MINADER is making available FCFA 100 Million to draw up the Invitro Plant Laboratory in Ekona. More money will be disbursed when the need arises,” he said. 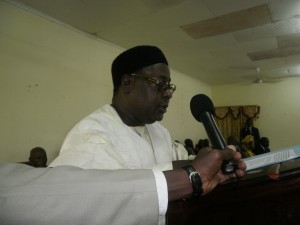 The Minister of Agriculture entreated Cameroonian youths to take interest in the agricultural sector, saying there is no limit to it. “Thanks to the MOU we’ve signed with IRAD, plantain suckers will be available anytime. In the weeks ahead, we will sign another MOU with IRAD, in which FCFA 100 Million will be made available for the production of good maize seeds. I have heard a lot of stories about the tractors. They are available and will be given to those who are into large scale production. With IRAD we will do more and diversify into other sectors of Cameroon’s agriculture. There is no joking about it. We’ve the possibilities to do it in Cameroon,” he mentioned.

Essimi Menye was upbeat about the future of Cameroon’s second generation agriculture, saying his ministry will launch the smallholders’ rubber scheme in collaboration with IRAD. “The researchers of IRAD got work to do. So, the centre must be action round the clock,” The Minister added. 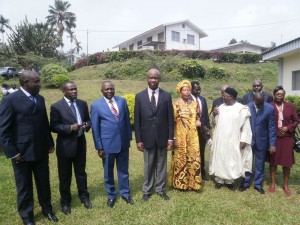 Essimi Menye of MINADER, fourth from the left, with Officials of MINADER & IRAD pose for a family picture after the MOU

The General Manager of IRAD, Dr. Noé Woin appreciated the initiative from MINADER, noting that the protocol agreement will facilitate collaboration between the two institutions in the areas of large scale production of planting materials for crops such as plantain, banana, cassava, yams, coco yams and mushrooms.

The IRAD GM explained that researchers of the Biotechnology Laboratory in IRAD – Ekona have developed rapid plant propagation methods based on tissue culture techniques. “These techniques are going to be used in partnership with MINADER to produce sufficient qualities of planting materials for farmers in Cameroon and beyond,” he said.

The Secretary General in the Ministry of Scientific Research and Innovation, Rebecca Ebelle Etame thanked MINADER for partnering with an institution under their guide, to boost production of crops and push forward the revolution of Cameroon’s agriculture.

He described IRAD – Ekona as the centre that champions classical and standard research in Cameroon and beyond. “This is the cradle of large scale agricultural research in Cameroon, with a mandate to promote agricultural development in crop & animal production, fisheries, livestock, forestry and the environment in the humid forest of Cameroon – an indigenous region for plantain,” note