Cab drivers in Buea have been expressing sundry opinions over the mayor’s recommendation of a new dress code for them henceforth.

During a meeting with executive members of the Buea Taxi Drivers’ Union on Monday March 18, 2013, Mayor Mbella Moki Charles declared that he would expect taxi drivers in the municipality to dress in white shirts over black trousers and a tie. 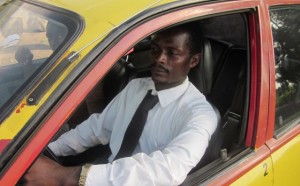 This dress code, he said, would make them look neat and presentable to their passengers and the public during celebrations to mark the 50th anniversary of Cameroon’s reunification.

“Taxi drivers constitute an integral part of our city life. It is also to reflect the dignity in their profession, the value, and of course, the significant role they have to play in the building of our city. They are not carrying dirt; they are expected to do this job in dignity and carefulness. I have been talking to their leaders, who have in turn, started educating their colleagues. We shall descend on the streets of Buea, to make sure that this is effectively implemented. I hope they are going to live up to expectation, “Mbella said.

To the president of the Buea Taxi Drivers’ Union, Samuel Molombe Ngombi, the mayor’s recommendation “is good. We have been discussing that with some of the drivers and they are of the opinion that we should look good, especially as the Head of State will be coming to buea. But that issue of white shirts and a tie is quite difficult, and will even cause more dirty drivers, because it will not be easy to take care of the white every day. For me, it should be assorted colours. However, I will sit with my executive, form a delegation to talk wif the mayor, so that we too can make our own proposals”.

Francis Ndive, a taxi driver holds that the proposed dress code, especially the white shirt, cannot work because they transport all sorts of people, including those from the farm

“In the course of trying to stow their goods in the boot, the white shirt could be stained,” he said.

Despite the numerous complaints, some drivers are comfortable with the idea, and say they had adopted same or similar dress codes as individual. This possibly explains why one of them has been nicknamed “Mr. Coat”.

Mean while, the Drivers’ Union executive say plans are underway for the convening of an enlarged meeting between the mayor and the Buea taxi drivers, to reach a consensus on the matter.