Motorbike Taxis a Boost to Cameroon’s Economy, Yet Menace to Public Safety

From the North to South, East to West, South West to North West and to Central region where the capital city, Yaounde, is located, motorbike taxis have become prevalent in Cameroon as the most used transportation vehicles.

It is even more so in the city of Douala in the Litoral and Kumba town in the South West, Maroua in the Far North and Bamenda in the North West. 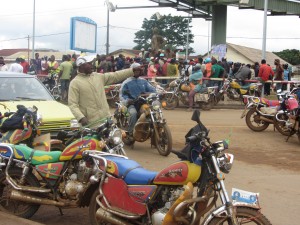 These bikes are called “le bensikin” in Douala and its environs, and in the South West and North West regions they are called “Okada.”

Cities with such means transportation are notorious for its rowdiness. The peace and tranquility of such places are replaced by the noise from the bikes, old and new alike.

Motor bikes, however, have become so instrumental in Cameroon’s transportation system – they are in part the engine of the country’s economy.

Traders find it easier to transport small scale of goods directly into the interiors neighborhoods where taxis cannot reach. It is even affordable for common person to pay an Okada that to pay a taxi.

Some people prefer motorbikes taxis considering the high rate of criminality and assault that is carried out by some men of the underworld who put on coats of taxi drivers. 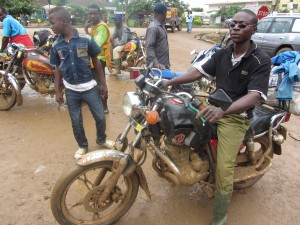 In the same light, most business individuals and a good number of the average population prefer motorbike taxis to get to their businesses sites or workplaces on time, especially in the event of traffic congestion. Motorbike taxes easily navigate pot holes and move faster in any road conditions.

In Kumba for example, most streets are not tarred and taxis would not dare take roads that lead to and from some residences or businesses, but motor bikes will go to any part of the town.   Hence motor bike taxis business is lucrative.

Sako a bike rider told iCameroon: “With my bike I work at least 6,000 frs CFA a day when business is not good. But during busy days like Kumba Main Market and Fiango Market days, I make up to 12,000 frs CFA.”

He went on to say, “sometimes I save at least 4,000 frs CFA a day when business is really good, but when things go bad, all the money I work goes to the mechanic’s shop for repairs.” Sako added that, this in turns favors the motorbike repairers. 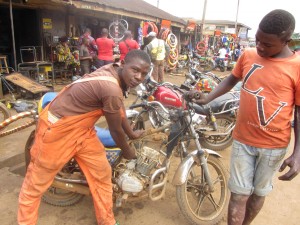 I fix virtually any mechanical problem. Repairs could be for cylinder, chain, carburetor, valve headlamps and some other parts. I work on simple faults like arranging chains for 300 frs CFA and bigger faults in the engine and Carburetor for 3000 to 5000 frs CFA and sometimes even more — depending on the gravity of the fault. But we really make money from the sales of motorbike spare parts. Which could be either first hand or already used parts. ”

The motor bike industry is therefore playing a large role in the economy.  However, what needs to be taken into consideration now is the safety of the population, bike riders and theirs passengers.

Most youths get into the roads for commercial bike riding without going through driving classes or without adequate knowledge of road signs. Some bike riders are so impatient that, they even violate road signs and traffic rules. They are always in a hurry or try to escape police traffic control thus endangering the lives of their passengers and pedestrians.

Even with lack of safety, motorbikes taxes continue to remain a major part of Cameroon’s transportation system and a boost to the nation’s economy.