Despite the noticeably advance state of preparations ahead of the celebration of 50 years of Reunification in Buea, some contractor, especially those working on road projects have failed to meet the March 31st deadline.

Although a few roads have been completed, works are still going on, on an greater majority of the project sites.

Examples of work sites still in progress include the new Presidential Grand Stand which contractors say may only be completed by the end of April, the new roads leading to the Governor’s Office and his residence; that at the main entrance to the Prime Minister’s Lodge, the Buea- Sasse-Mile 4 stretch, as well as other road and lodging facilities. 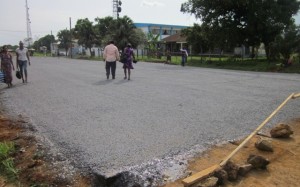 Tarring of stretch of road in Tiko

Reports say architects are also on deck for the crafting of a suitable reunification monument to be erected in the premises of the Governor’s office.

Work on the area to host the podium for socio-cultural animation was launched only about a month ago, and according to the Regional Delegate of Culture, Essibi Daniel, the works may only be completed in the next six months.

In the domain of energy, the electrification of the streets of Buea is advanced, but water supply remains a nightmare to Buea inhabitants.

Critics, members of Civil Society, and other intellectuals have also expressed concerns that apart from the infrastructural projects, nothing is said about intellectual debates and all such exercises on the subject of reunification. 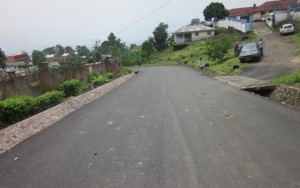 All of these indicators have watered down speculations that the President of the Republic, Paul Biya, would be in Buea on May 20.

Notwithstanding, Governor Bernard Okalia Bilai, has set out for regular checks on all project sites, to evaluate grounds covered so far. Governor Okalia Bilai has also committed to holding press briefings fortnightly, to keep journalists abreast with the overall execution rates on all projects.