At the back of Muea market, in a building that has not been in use for years, an idea grows. The structure was built for farmers about four years ago by the Southwest Delegation of Agriculture, but for some reason, was  never used, until now. Today, a CIG known as Agro-Hub, has created a supermarket for fresh produce, something Buea shoppers are experiencing for the first time.

“Essentially, when you walk into Agro-Mart, you will find all kinds of foodstuff”, says Agro Hub creator, Valery Colong. “Tomatoes, garri, groundnuts, egusi and much more.” Of course, these items can be found in any other market, so what’s the difference? For one thing, the presentation. The floor of the building is tiled, the foodstuff is painstakingly examined for the best, and is then neatly packed in wooden counters that have price tags for the various goods. Also, goods are charged in kilograms. 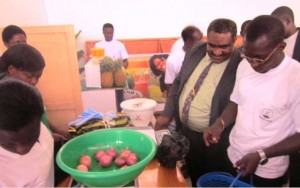 “There are high standard hygienic conditions in this space, which is why we started this market in the first place,” says Colong. “We realised that our markets were very unclean and food safety is a major concern.”

Agro-Mart is one facet of a two-pronged effort to increase agricultural gains in Cameroon. This endeavour is undertaken by Agro-Hub. Agro-Hub exists to facilitate the flow of information between farmers and agriculture experts using text messages. The CIG also works to expand market opportunities for farmers in Cameroon.

Agro-Mart  is much appreciated by farmers who supply much of the produce on sale there. “This initiative will create an advantage for tomato farmers because, tomatoes are perishable goods,” says Vincent Appeh, a farmer who supplies tomatoes to Agro – Hub. “In Muea market for example you can take about two thousand baskets and the market is not there. So you can end up taking back tomatoes to your house, which you cannot store and most of them will get bad. But with the initiative of Agro-mart, all I have to do is bring my tomatoes to them, they weigh it, they give my monies and I go and they look for a market for it.” 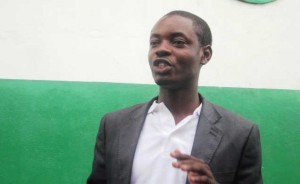 One of the ways Agro-Hub will look for this bigger market will be connecting with restaurants and hotels in and around Buea. Colong says “If they need plantains, tomatoes, vegetables, we will deliver at their doorsteps.”

Currently Agro-Hub is networking with 88 farmers in the Southwest, with 15 of them supplying the Agro Mart.

The Delegation of Agriculture for Buea collaborates with Agro-Hub and loves the Agro Mart idea. “The Delegation of Agriculture and Rural Development is very prepared to support this idea of selling by metric measurement,” said the Sub Delegate for Agriculture in Buea, after cutting the ribbon opening Agro-Mart on March 28. “If other products are being sold using kilograms, why not our normal foodstuff so that they too should have a standard price…We have sensitised out extension staff, so that they should mobilize the farmers in the region.” 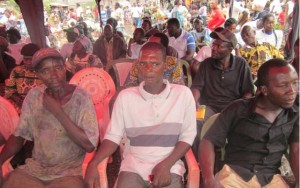 The prices at Agro Mart and the idea of shopping for fresh produce in a supermarket setting are very appealing to customers. “What I really praise much is the hygiene,” says one woman shopping at Agro Mart. “The prices are moderate, they are what everybody will want.” Another man says “the place is really beautiful and I am very happy with it. The prices are very competitive and I love their products.”

While Agro-Mart has been welcomed by farmers, agriculture experts and consumers, its creator stresses on the fact that the setting up of Agro-Mart in Muea, is, at this moment, the launch of a concept. “This is a prototype,” says Colong. “We don’t have all the answers yet because this is very challenging and there are many variables. The real purpose for this is to try to promote agricultural market development and we hope that through great customer service, we can help to expand the agricultural market itself.”