UBSU  to-date has not been Officially Recognized – VC
After the violent strike action that rocked the University of Buea recently, leaving several people severely injured and University property to the tune of close to FCFA 100million vandalized, the main architects of the rebellion, the University of Buea Students’ Union, UBSU, has been suspended.

According to a communiqué, bearing Decision no: 2013/0252/UB/VC/REG of 17th May, 2013, and signed by the Vice Chancellor, the decision to suspend the Students’ Union was reached during an extraordinary meeting of the Committee of Deans and Directors, held on May 16, 2013. 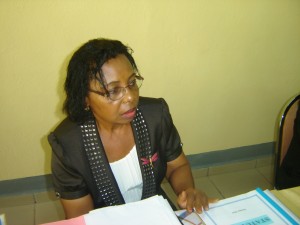 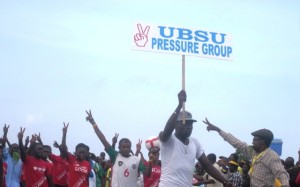 The Committee cites the violent disruption of classes by UBSU, using hammers, machetes, knives, clubs, and 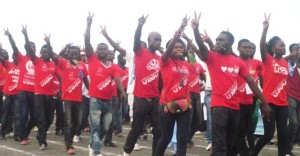 other weapons to chase teachers and students out of lecture halls; and the injuring of several unarmed security guards on duty on Wednesday, May 15, as part of their reasons to suspend the Union.

The communiqué further mentions previous violent acts by UBSU, such as wanton looting of University property, the

burning to ashes of an official car worth CFA 30 million, and the hostage taking of the Vice Chancellor for over five hours on campus last February 6, to elucidate their suspension of UBSU.

The Committee of Deans and Directors also condemned the circulation of “tracts carrying awful lies, intended to incite the student population against University Administration, and mislead public opinion”.

The release further states that UBSU to-date has not been officially recognized by UB administration.

It is therefore against this backdrop that it was agreed that considering the need to reestablish order, and ensure a violence-free campus, the University of Buea Students’ Union, UBSU, be suspended, and that any student involved in any activity in the name of UBSU, exposes him or herself to sanctions, according to the regulations in force.

However, all Faculties, Schools, Colleges and Departmental Associations shall continue to function uninterrupted.

Violent clashes erupted on the UB campus on Wednesday May 15, when UBSU, among other reasons, demanded the release of some students currently awaiting trial on the account of the February 6 strike action that saw the hostage taking of the Vice Chancellor for over five hours.

Whether or not UB was going to take part in 20th May festivities in Buea, was a million dollar puzzle. Even if students had registered for the exercise before the strike action, their participation at the event was more or less not guaranteed, given the prevailing climate, which had forced many out of Buea.

Notwithstanding, it was all smiles and cheers at the Bongo Square, when “The University of Buea; the Place to Be” was announced.

Whether or not UBSU’s demand for an increase in their participation fee was respected, was no longer the issue. Everyone, including Governor Bernard Okalia Bilai was just happy, and congratulated the UB administration that the institution could rise above the recent unrest for nation’s sake. National Unity indeed!

Despite the fact that there is no longer outright violence, the Molyko neighborhood is yet to be completely peaceful. Elements of the forces of Law and Order in civilian attire still patrol the area at dusk, whisking away suspected ringleaders of the recent strike action.

Meantime, tear gas is still been used to disperse any gathering in some parts of the student residential area.

Reports say the forces of law and order molested some occupants of the UB Halls of Residence (all females), for going back to their rooms after May 20 march-past, leaving them traumatized, injured, and in serious need of medical attention. Parents and guardians of the injured students say they are on course, to bring the deviant uniformed men to book.

Informed of the unfortunate incident, UB authorities have promised to redress the situation.

As investigations continue, calm has returned to the campus of “the place to be”, and lectures have effectively resumed since Tuesday May 21 2013.