Rev.Fr George Jingwa Nkeze, Pro-Chancellor and Interim President of University Institute of the Diocese of Buea, UIDB, has said the two tractors and its accessories received from the Ministry of Agriculture and Rural Development, MINADER, are important equipment for their students in these days of modernity. He made the remark at the official reception ceremony of the tractors, recently, in the UIDB Molyko-campus, Buea.

“This equipment will boost the training of our students, who are professional servant leaders, so that they will be able to contribute to the betterment of their respective communities and the society in general,” he said. 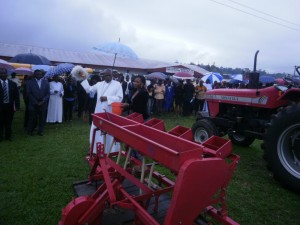 Fr. Nkeze expressed the happiness of his institution to President Paul Biya and MINADER for believing in them and the Chancellor of UIDB, Mgr. Immanuel Bushu, who has a deep interest in agricultural studies. He will add; “No Cameroonian will be left behind and not UIDB in the vision of President Biya’s development of Cameroon.” 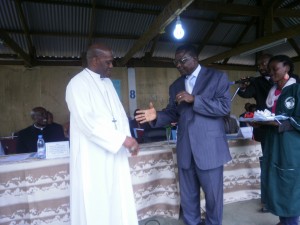 make the country an emerging nation is underway, following the availability of modern equipment like those given to UIDB. “We have to get into mechanised agriculture,” he noted, while inviting the management of UIDB to put the tractors at the disposal of the students so as to improve productivity and make Cameroon food sufficient.

According to Fon Ndikum, the government has come to give its own touch to the realisation of UIDB’s vision, 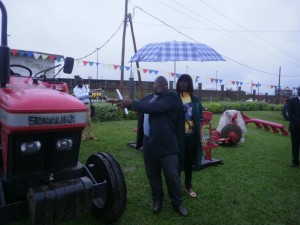 Dr. Tata of UIDB School of Agriculture explains how the tractors will be used.

which is that of producing job creators and not job seekers.

UIDB’s Chancellor and Bishop of Buea Diocese, Mgr. Bushu noted with joy that the tractors they have been looking forward to have come to UIDB. “These are useful 20th century equipment that must be cherished and made good use of,” the prelate mentioned.

He said Cameroon’s agriculture is evolving and the trend now is to go higher, while describing the event as God’s will. “I enjoin all to do their various activities well. Agriculture is at the base of all. We must get involved and change our mind set. We have taken a commitment to give the school of agriculture pride of place in UIDB,” he added.

Earlier, the Southwest Regional Delegate of Agriculture and Rural Development, Lawrence Forwang read the decision from MINADER giving the equipment to UIDB. He said these farm inputs are aimed at taking Cameroon into the second generation agriculture; hence they should be judiciously and effectively used.

Forwang advised that there is need to have a trained operator for the tractors to be properly employed.

After the official handing over of the keys of the tractors by Fon Ndikum, representing Southwest Governor to Mgr. Bushu, the latter blessed the equipment, now ready to go into action.