At 20th Anniversary Celebrations: GCE Board Hailed, Charged To Do More

The government of Cameroon via the Ministry of Secondary Education has lauded the Cameroon General Certificate of Education Board, fondly referred to as the GCE Board for making enormous progress on educational assessment in the country. Minister of Secondary Education, Louis Bapes Bapes made the remark Thursday, November 28 2013 during celebrations marking twenty years of the GCE Board and official inauguration of their new head office in Molyko, Buea. 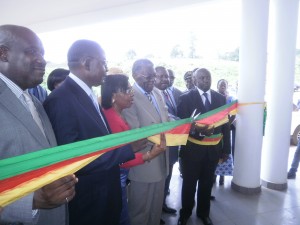 Louis Bapes Bapes(4th from left) joined by Southwest Regional authorities, cuts the ribbon that leads to the new office of the Board

Bapes Bapes will mention government’s positive appreciation, while congratulating the Registrar of the GCE Board, Humphrey Ekema Monono and his staff. “As you continue in that direction, rest assured of government’s unwavering support,” he said.

While acknowledging the successes recorded so far, the Secondary Education Minister invited the Board’s Registrar and his team not to relent their efforts. “The people and government of Cameroon still expect more from you and your 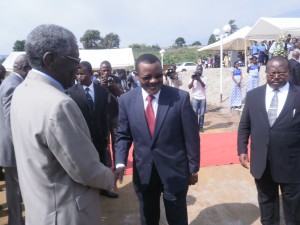 collaborators. As the people of Cameroon hold the government accountable that is how the government will hold her agencies more accountable. So, state corporations and establishments are required to be result-oriented,” Bapes Bapes noted.

He indicated that state subventions and other funding shall be based on the level of performance, entreating the management and staff of the Board to double their efforts for greater 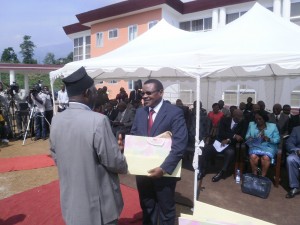 achievements. “Do not relent; forward ever, backward never,” he added.

Bapes Bapes prescribed cleanliness and maintenance of the new building, told the Board’s management to start implementing the outcome of the 2010 syllabus review conferences in Limbe and Kumba, ensure adequate security and credibility of the Board’s examinations, pursue periodic review of their syllabus content and assessment strategies so as to make the examinations under their control reliable and comparable to those of 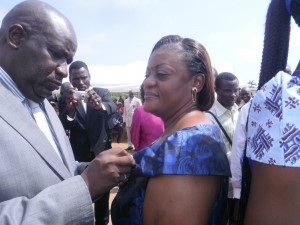 SDO of Fako Division, Zang III decorates Gwendoline Nkwantah, staff of the Board with a Bronze and Silver medals

other examination Boards, engage into scientific, professional, pedagogic and technological developments and make the GCE Board’s certificates a veritable international currencies that will continue to be accepted in the international market place. “The Board has set a high standard for itself and its products, I challenge you to maintain them,” he requested.

He will enjoin the Board to pursue studies on how to widen the types of special needs they can cope with so as to make their examinations more inclusive and invite all to give their support to this prestigious institution.

Bapes Bapes saw a bright future for the Board, noting that after the construction of Block A, block B will begin soon and subsequently block C. “there is no stopping for the infrastructural development of the Board and the capacity building of the staff engaged by the Registrar,” he said.

A delighted Monono said after twenty years the Board is celebrating significant achievements, while citing some of them; the provision of the legal framework for an organisational structure by a Prime Ministerial Order of October 12 1993, the presence of a full council and ninety-two permanent staff and more, the acquisition of updated working materials, the transition from one automated system to another, passing through the Optical Mark Reader, OMR scanners and forms to E-registration, the movement from two examinations with thirty subjects to eight examinations with over four-hundred subjects, while registering a geometric candidate increase of more than 652 percent – from 23,000 candidates in 1994 to more than 150,000 in 2013, the effective payments of all the dues that go with marking the GCE, the positive revision of staff salaries with no arrears unpaid, the availability of a modest fleet of eight cars, a truck and a bus for the Board, the membership of the Board in two major international associations of educational assessment in Africa and beyond and the development of an African Indigenous Data Processing Software.

Monono rejoiced that after a brief sojourn at IPAR Buea and the rest of the twenty years spent in rented accommodation, there is need to celebrate now that the Board is housed in its own and befitting structure. He added; “It is a monument reflecting the commitment of a people with a common purpose and a physical embodiment of the English sub-system of educational assessment in Cameroon.”

The Board’s Registrar said the ceremony is also an opportunity to recognise and congratulate those who carried the milestone “across the Jordan”, quoting Joshua  4: 1 – 7, while highlighting the trio at the starting block; pioneer Registrar, Andrew Azong Wara, his deputies; Johannes Mbong Ngole and Mathew Abiewa Akoko, the second Registrar, Dr. Omer Weyi Yembe(deceased), pioneer Board Chair, Sylvester Dioh, the second, Prof. Herbert Endeley (all of blessed memory).

Some twenty staff of the Board were also given Labour Medals (Bronze and Silver each) in recognition of the meritorious services rendered.

Earlier, the Mayor of Buea municipality, Patrick Esunge Ekema lauded the government for making strides in the educational sector, while commending the Board’s quest for constant change for the good of the English sub-system of education in Cameroon.

Gregory Esua, a staff of the Board expressed glee with the two medals received, noting that it is a sign of hard work and greater things to come. “I enjoy it and it is a mark of recognition. The future is going to be brighter,” he said.

Susan Kange was overwhelmed with her medals, saying the twenty years at the Board is a time to praise God for all His goodness. “We are coming up and things will only get better,” she mentioned.

Gwendoline Nkwantah saw in her two medals the fruits of hard work. “We have worked for it. The twenty years was not all roses but we stayed on. After twenty years, we shall continue to see more goodies,” she wished.