Bishop Emeritus of the Diocese of Buea, Mgr. Pius Suh Awa is now resting in eternal peace in the Regina Pacis Cathedral in Small Soppo, Buea. The pioneer black Bishop of Buea Diocese, who died February 9 2014 at the Doctor Muna Memorial Clinic in Bonanjo, Douala after suffering from Cardio- Respiratory failure was buried Monday, February 24 2014. The tradition of the Catholic Church that a Bishop is buried inside the cathedral church was once more respected.

In his homily for the last funeral mass for Mgr. Awa, at the premises of the Regina Pacis Cathedral, Small Soppo, Bishop Andrew Fuanya Nkea of Mamfe Diocese, one of the four Bishops in Cameroon ordained Priest by the deceased, described Mgr. Pius Suh Awa as a great pillar of the Catholic faith in Cameroon and the world. The Shepherd of the Mamfe 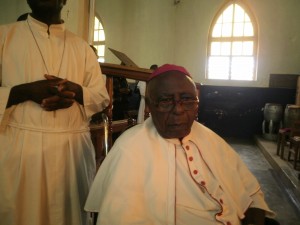 Bishop Emeritus of Buea Diocese, Mgr Pius Awa in one of his rare outings in 2013

Diocese said Mgr. Awa was one of the father founders of the Church in the Ecclesiastical Province of Bamenda, the first indigenous Bishop of Buea Diocese, after Bishops Rogan and Jules Peeters. He will add; “Mgr. Awa impacted the lives of many people in the world as a Bishop for 34 years. He exerted a lot of influence on many people in this world.”

According to Mgr. Nkea, Bishop Awa lived as a link in the chain of the spiritual heritage of God’s children in the Church 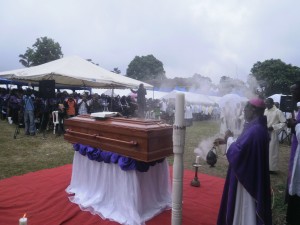 Archbishop Cornelius Esua, ordained priest by Mgr. Awa, does the commendation before the burial of of the fallen prelate

and has left a legacy that will never end, following his actions, which include ordaining Priests, some of whom are now Bishops. “So, the Episcopacy of Mgr. Awa will never end,” he said.

Mgr. Nkea said in Christ, Mgr. Awa is not dead, he is asleep and alive, while also drawing inspiration from St. Paul to say for Bishop Awa as for any other Christian, life and death are two sides of same coin, for the most important thing is that we belong to the Lord.

Mgr. Nkea(R) extends a hand of love to his Bishop Emeritus, Pius Suh Awa of Buea Diocese after his appointment on July 10 2013

He saw in Mgr. Awa a Bishop who knew he was a Bishop and knew how to be a Bishop; exercising without reserve the threefold offices of teaching, sanctifying and governing within his Diocese. “Mgr. Awa had a grip of his Diocese and was present everywhere, even when he was absent, making spiritual and infrastructural gains for the Diocese of Buea,” Bishop Nkea mentioned.

Bishop Nkea, who served as a Priest and Chancellor to Mgr Awa for more than two decades explained that the deceased ran 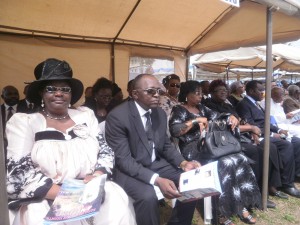 Southwest Regional Governor, Bernard Okalia Bilai(2nd from left) in the company of other state dignatories at the funeral mass for Mgr. Awa

his Diocese according to his conviction as a pastor, the spirit of Christ, the teaching of the Magisterium and not on popular wishes. He will cite the example when Mgr. Awa refused the people of Mamfe Town from building a new Church in 1997 because he (Mgr. Awa) knew that he had asked for a Diocese that was coming in 1999 and would need a cathedral church. “But at that time, he could not tell the people the reason for his refusal. He would rather get a bad name than break the pontifical seal,” he added. 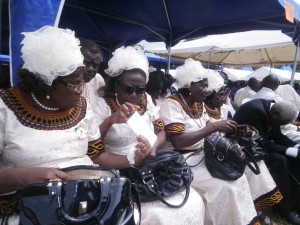 Some members of the biological family of Mgr. Awa at the funeral mass in the Regina Pacis Cathedral premises in Small Soppo, Buea

The Prelate will bring to the fore one of the legacies of Mgr. Awa, which is the manner in which he solved the Maranatha Crises of 2003 in Buea Diocese with love and not the law, granting unconditional forgiveness to all those who offended his person, priests, religious, dedicated and loyal members of Christ’s lay faithful of the Church in Buea Diocese during those trying moments.

He said Mgr. Awa’s life of 84 years have been one long continuous miracle of God and he died a great death, asking the members of the congregation if they die, will they go to Heaven?

A flurry of tributes from across Buea Diocese, Cameroon and the world were recorded by the Bishop of Buea. These included that of the Secretary of State of the Vatican and the Superior General of the Missionary of Saint Paul in Nigeria.

Mgr. Immanuel Bushu, Bishop of Buea thanked and praised God for Mgr. Awa for all that he did to the Church and humanity.

The Vice President of the National Episcopal Conference of Cameroon, Mgr. George Nkuo, Bishop of Kumbo Diocese said Mgr. Awa solicited the good training of his priests, reason why four Bishops in Cameroon are priests he (Mgr. Awa) ordained. These include; Archbishop Cornelius Fontem Esua of the Archdiocese of Bamenda, Mgr. George Nkuo, Mgr. Andrew Nkea and Bishop Emeritus of Mamfe, Mgr. Francis Teke Lysinge, then priest from Buea Diocese that was appointed Bishop of Mamfe, a Diocese carved out by Mgr. Awa from his Buea Diocese.

Archbishop Emeritus of Calabar, Nigeria, who was present at the final funeral mass saw in Mgr. Awa a lovable friend and a kind person, adding that Mgr. Awa did so much for God.

Rev.Fr Franklin Fomukong, President of the Association of Diocesan Priests, ADP, Buea Diocese expressed the happiness and gratitude of the Diocese of Buea for all, who came to support Buea Diocese and the biological family of Mgr. Awa.

The President of the Buea Diocesan Council for the Laity, Mrs. Rosaline Nganku Menga saw in Mgr. Awa a great pastor, a man of strength in character and wit, with an unbeatable memory and full of good humour.

Mgr. Awa was born on May 4 1930. August 16 1938, he began his primary education at St. Joseph’s Primary School in Mankon and in 1943 – 44, he did standard five and six in Njinikom. 1948, he will enrol in St. Peter’s Teacher Training College in Bambui. 1952, he changed option and got admitted into the minor seminary in St. Joseph’s College, Sasse, Buea. From there, he will proceed to the major seminary in Enugu, Nigeria and subsequently to Rome, Italy between 1955 – 58.

December 20 1961, he will be ordained priest in Rome by Gregorio Pietro Cardinal Agagianian and his priestly ministry will move on to May 30 1971, when he was designated Co-adjutor Bishop of Buea, taking over from Bishop Jules Peeters of the Mill Hill Missionary. Mgr. Awa’s active Episcopal ministry will last from 1971 – 2007, when he retired and was replaced by Mgr. Immanuel Bushu, then Bishop of Yagoua. From 2007 to his death on February 9 2014, Mgr Awa was Bishop Emeritus of Buea.

His Eminence Christian Cardinal Tumi, chief celebrant of the funeral mass for Mgr. Awa was joined by more than ten Archbishops and Bishops from Cameroon and Nigeria, over fifty priests, the Governor of the Southwest Region, Bernard Okalia Bilai and more than five thousand Christians and well wishers to pray and bid farewell to the fallen prelate.