After Creation of HTTC Kumba: We’ve to Do a Situational Analysis – UB VC

The component of the University of Buea, UB has changed since Friday, March 7 2014 with Presidential Decree Number 2014/090 signed Paul Biya, President of the Republic of Cameroon, creating a Higher Technical Teachers’ College, placed under UB with operations in Kumba. From an initial nine establishments, UB now has ten with HTTC Kumba included.

At a press conference, Wednesday, March 12 2014, UB’s Vice Chancellor, Dr. Nalova Lyonga told journalists that her administration has since March 7 begun working on what is expected from them to put the new institution on the rails. “My collaborators and I have begun to do a situational analysis to know where to start, which of the fourteen departments to start with, the most important and how we progressively move forward,” the UB boss said. 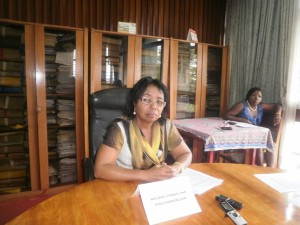 According to Nalova there is more to come with the spirit of Article 3 of the March 7 Presidential Decree. “It is not just the creation of the school; we still have a long way to go, the management and administrative staff on the ground in Kumba. The government did not come from the blues to create the school, a lot of work had been done in the background. Even the current administration in UB has been discussing the relevance of such an institution, so that a gap can be filled,” she explained. 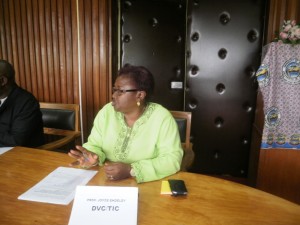 Nalova added that the gap will be filled following the timeliness and intelligence of President Biya to offer this gift to the University of Buea, the people of the Southwest Region and the youths of Cameroon. “Mr. Biya has given us this institution at the most appropriate time. We are thankful to him. UB is happy, not the VC. Many people are also happy. It will close a gap we have been yearning for.”

She saw in the creation of the HTTC a happy event, coming on the heels of President Biya’s official visit to Buea, where he joined the rest of Cameroon to celebrate 50 years of the country’s reunification.

On the worrying issue of the heavy bureaucracy in Cameroon, running an institution from Kumba with the boss (the VC) in Buea, Nalova dismissed any fears, saying there will be no obstacle in terms of administration. “The HTTC of Kumba with supervision from UB is one of the many HTTCs that are in the country. The others have been operating with ease, we will also do same. With our Anglo-Saxon tradition, we have a responsibility to give in our best and make the much expected difference the public and the government expects from us. We will be operational in the 2014/2015 academic year. So, a lot of background work is ongoing,” she noted.

She will concur that there are pains in this birth stage of the institution but the UB administration will not wait till everything is perfect. “Even the current UB structure was not the same when we started in 1993. Even now, the current departments are not up to the level we would have loved them to be, but we are not resting on our laurels. We are working everyday to ensure that things move forward. It is the same spirit we will apply to HTTC Kumba and even more,” the VC said

The UB VC said entry into the HTTC Kumba like it obtains to the others across the country will be through the study of files and entrance examination, but she allayed fears that the Presidential Decree, which came out only in French, one of Cameroon’s two official languages does not give the impression that HTTC Kumba will operate as a Francophone institution. “Let the use of the French language in the decree not derail us, but we cannot isolate ourselves from the national context. We have to extract the best of both cultures,” she advised.

Nalova will be corroborated by the Director of the College of Technology in UB, Dr. Ndeh Ningo, who said HTTC Kumba has come to reinforce government’s quest to professionalise education in Cameroon, create employment opportunities, set a solid ground for technical training, while giving UB a unique opportunity to create a niche for themselves with an institution with such a stature.

UB’s Deputy Vice Chancellor in charge of Teaching and Information and Communication Technology, Prof Joyce Bayande Endeley said the peculiarity of HTTC Kumba is its orientation towards professionalism and responding to the environment in Kumba. “Today’s emphasis is on new technology. Kumba will facilitate the field experience of the training, the students and those guiding the project,” she added.

Prof. Therese Tchombe, Chair of UNESCO, UB re-echoed the aforementioned views, saying the mindset in Kumba, besides the political interest will change for the parents and the population. “The spread out of Buea is good. The main campus in Buea does not need any pressure.”

Nalova said the creation of HTTC Kumba is a leeway for the putting in place of a mini-industrial zone, which will subsequently transform to a larger entity and the livelihood of the people in the Region. “The teaching, the awareness, the outreach will facilitate the change that we are projecting towards the country’s industrialisation. UB should the roadmap for that change and be at the centre of the communal life in the Southwest Region,” she prayed.

While looking forward to subsequent modalities as specified by Article 3 of the March 7 Decree, the current HTTC Kumba will go operational with fourteen departments.