Issues surrounding regulation and deregulation in the Cameroonian media landscape are on for public discussions. These were the issues on focus at a PhD defence in the Board Room of the Faculty of Social and Management Sciences, University of Buea, UB, Saturday, July 12 2014. The PhD candidate was Henry Muluh Zuyingong, lecturer in UB’s Department of Journalism and Mass Communication, JMC. 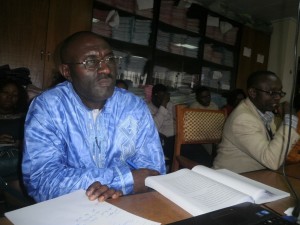 Muluh defined regulation in the media sector as telling media officials what they should do and what they ought not to do. “It is providing a framework in which the media should operate,” he added. He will define deregulation as “removing some of the bottlenecks that impede the media to operate in a liberal period. We cannot be in the age of liberalisation and still talk about the regularisation and control of the media.”

According to Muluh, during the return of 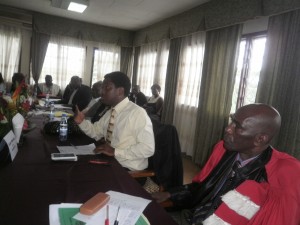 Prof. Victor Mbarika (2nd from right) chair of the PhD thesis jury poses a question to the candidate

On what his PhD thesis; Broadcast Regulation And Deregulation In 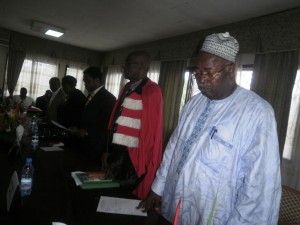 The jury that declared Henry Muluh fit for a PhD degree

Cameroon, 1960 – 2012: Implications For Radio Journalism Practice, is all about, Muluh said the regulations which came in the Cameroonian media sector in the 1990s and effective for broadcast media in 2000 has been implemented rather selectively and with hesitation by the government. He will add; “That has had a negative impact on the profession of journalism in Cameroon, especially radio broadcasting. Though regulation has come with growth in Cameroonian journalism, the growth is not in quality. My findings

indicate that there are few professional journalists vis-a-vis the number of radio stations we have in Cameroon.”

Muluh expressed regrets that deregulation is not having the expected results in Cameroon as per his findings, whereby journalists are more interested in freebies; journalists are at the beck-and-call of politicians and more. “If government does not provide the legal framework to deregulate, show the necessary interest in deregulation, then the disorder we have in the Cameroon media landscape will continue,” he mentioned.

Chair of the jury, Prof. Victor Wacham Mbarika of the ICT University in Louisiana, USA noted that Muluh’s findings have provoked new debates in the area of journalism, which is good for the profession and the academia.

The Endowed Professor, advised that in the world of research, there is relevance and rigour, where theory is enhanced and reliability analysis. “Remember, we are in a PhD thesis and not a newspaper article, which must be well grounded in theory. Muluh has done a good job by grounding his theory. It is a relevant work he has done, especially on the fact that we cannot really blame government anymore. The government has done its part and I see the government of Cameroon as exemplary in allowing freedom of the press. I will stand on that argument,” he said.

Prof. Mbarika congratulated Muluh for showing that for regulation and deregulation to work, journalists and other professionals in the media must come together to self regulate, no matter their socio-political background, they come together and set the rules and those who do not respect the rules, are kicked out of the profession or blackmailed. “I like that aspect of self regulation and I have hardly seen that in any work. That is one of the greatest contributions he has made to this debate.”

Prof. Albert Mbida, member of the jury and senior official in the Ministry of Communication indicated that media organs across the world are generally under government control, though in some cases some people are recruited to front for these media houses. He expressed delight for the good research done by Muluh, while noting that it is good for the future of Cameroonian journalism.

Prof. Martha Tumnde, Dean of the Faculty of Social and Management Sciences, UB and member of jury saw in Muluh’s PhD thesis a contribution to staff development in the faculty in which they all lecture, recalling that Muluh is a long-time teaching staff in the Department of JMC, UB.

She will commend Muluh’s research, adding her voice to the debate that there is need for regulation in the Cameroonian media sector, even in the period of deregulation.

Prof. Tumnde proposed that the private media in Cameroon should be structured as companies and not a private property.

However, another member of jury, Prof. Misse Misse will chide Muluh for not making enough references about Cameroonian journalism in his findings.

At the close of the one-hour defence, with a five-man jury composed of Prof. Mbarika as chair, Prof. Mbida, Prof. Misse Misse, Prof. Tumnde and Prof. Enoh Tanjong, the jury described Muluh’s PhD thesis as original and groundbreaking. “So, the panel decided he (Muluh) should pass with an A Grade, which is excellent. He is now Dr. Henry Muluh,” Prof. Mbarika announced.

Dr. Muluh’s PhD thesis is the second in the Department of JMC, UB, after the first defended by Dr. Kingsley Ngange in 2012.