The Catholic University Institute of Buea, CUIB, is out to train a new generation of young, dynamic, talented and problem-solving entrepreneurs with moral and spiritual values that will transform and bring sustainable development to their communities. This is the background in which CUIB’s authorities drew inspiration to open their doors to members of the community, who are stakeholders to the university’s everyday business.

Christened The Stakeholders Meeting, the Director of CUIB’s Centre for Entrepreneurship, Research and Innovation, CERI, Thaddeus Eyong said they are out to make the university part of the community, while sharing their short and long term plans 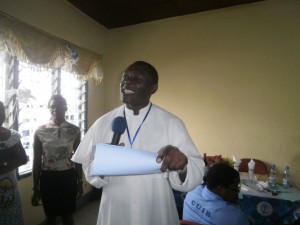 President of CUIB, Rev.Fr George Nkeze - We must foster the good of our children and the community

According to Eyong, their intention is to make their students and graduates change agents across the world by providing them professional and hands-on education. He mentioned the three arms 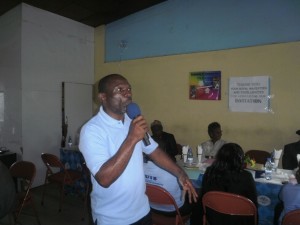 Thaddeus Eyong, Director of CERI at CUIB, explains the motive of the stakeholders' meeting

of CUIB, which are; Academic, which takes care of the business and professional aspects of the students, the Pastoral, which handles the spiritual aspect of the students and staff and the CERI, which is the practical, industrial, entrepreneurial and commercial component of CUIB.

On CUIB’s Points of Pride, Director of Admissions, Joyvice Chofor said after four years of existence, CUIB is now a member of the International Association of Catholic Universities and Colleges, ACCU. He 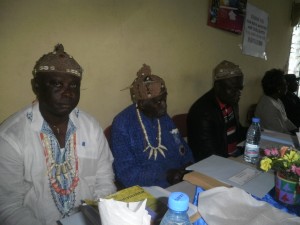 Traditional authorities of Buea at the stakeholders' meeting in CUIB

mentioned that CUIB has been rated amongst the best twenty private universities in Cameroon according to the Ministry of Higher Education, adding that 80% of their students are in an entrepreneurial base group.

CUIB’s President, Rev.Fr George Jingwa Nkeze noted that they are out to serve the community and train students that will make the difference across Cameroon and beyond. “We need a new paradigm shift in our education. We have to foster 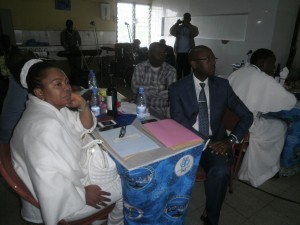 Some stakeholders of Catholic University Institute of Buea at a meeting

the good of our children, their values, our communities and the nation,” he added.

Fr. Nkeze revealed a scholarship scheme as part of CUIB’s community responsibility. “CUIB has engaged to provide 12 scholarships to underprivileged children in the following villages in Buea municipality; Wokaka, Upper Muea, Lower Muea, Wokoko, Great Soppo, Small Soppo, Woteke, Wovila Sasse, Bonjongo and Buea,” he said. He explained that the scholarship will take into consideration gender issues and be in any of CUIB’s HND disciplines; Level I and II, covering tuition of FCFA 380,000 while parents will take care of lodging and feeding.

The CUIB President said their students are groomed to be competitive across the world, via the GRE Programme, noting that Cameroon’s emergence must be put into reality by creating programmes and structures that will lead to professionalism. He announced the upcoming and maiden commencement ceremony of CUIB, slated for December 6, 2014 at the CUIB campus in Buea.

Other stakeholders at the meeting, including Southwest Regional Delegate of Research and Innovation, Anne Sama, took a commitment to follow CUIB’s vision, while indicating their respective support and proposals on how to push forward Cameroon’s higher education and the development of the Cameroonian youth.