The Member of Parliament, MP, for Buea Urban Constituency, Hon. Arthur Ekeke Lisinge has made his maiden outing since he got the parliamentary seat in the 2013 elections. This outing, at the premises of Cameroon OIC, Buea, Tuesday, August 13 2014, gave the MP the opportunity to declare that he will focus his parliamentary grants on basic education.

According to Hon. Lisinge it is critical to develop the child for a better adult. “This is a sector that cannot be neglected. We have to contribute to the education of our children and 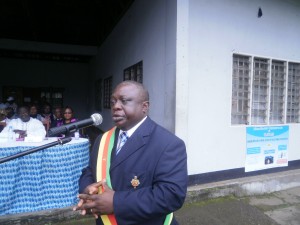 Hon. Arthur Ekeke Lisinge explains why his parliamentary mandate and grants will be geared towards basic education

lay the foundation for the future of our country. Educating the child is not giving him/her fish but teaching them how to fish and fend for themselves for the future,” he said.

The MP for Buea Urban indicated that he has started a long journey with the Basic Education sector of Buea subdivision, noting that it will be a yearly affair and the schools that have not received benches and didactic materials for the 2014/2015 academic year will have theirs, subsequently as his five-year 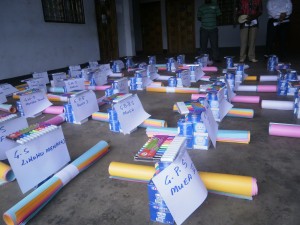 Stationery for schools: A look of the didactic materials to facilitate teaching for the 2014-2015 academic year

He invited the head teachers of nursery and primary schools in Buea subdivision to move along with him, saying that they should also make a list of their problems so that he can forward them for possible solutions at the corridors of power in Yaoundé.

Though basic education is his focus, Hon. Lisinge mentioned that he will also give assistance in the social and medical sectors, hinting on refurbishing some of 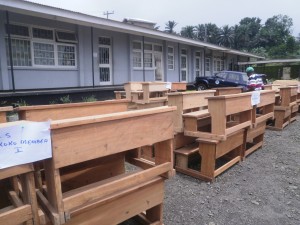 Benches destined for some nursery and primary schools in Buea Urban Constituency.

the health facilities in his constituency; making available beds, providing electricity and other social amenities.

On his political agenda for Buea Urban, the MP for the CPDM party said he has benefitted from the votes of a heterogeneous community to get to the parliament so, all the voices must be heard. “The Buea Urban Constituency is a complicated one, with all shades of opinion. This is a very educated community. Representing them in the 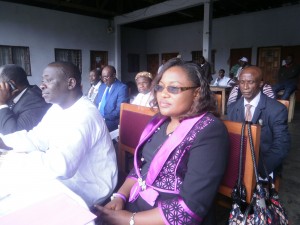 parliament is a big challenge. With the contributions of all the stakeholders, I will be able to adequately carry their aspirations in the course of my mandate.”

On behalf of the 45 beneficiary nursery and primary schools in the Buea Urban Constituency, Mrs Clara Nduma, head teacher of Government Primary School, Group II, Great Soppo, did not only promise to make good use of the materials donated for the 2014/2015 academic year, she thanked the MP for giving a 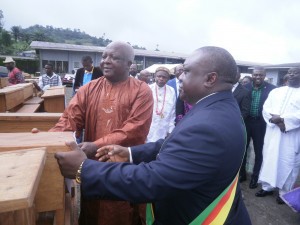 deep thought to the betterment of the basic education sector and the development of the Cameroonian youth.

Nduma expressed happiness for the gesture, adding that it is timely as government support to their schools is either small or some time comes in very late.

Inspector of Basic Education, Buea Subdivision, Mrs Magdalene Lysinge Limunga will describe Hon. Lisinge as a visionary politician, noting that his support to the basic education family is the promotion of quality education, teachers effectiveness in class and developing the minds of the younger generation.

She will be corroborated by the Divisional Officer of Buea, Paul Wokam Kouam, who said the MP’s move is a source of happiness to the people in his area of jurisdiction.

Kouam will mention that education remains the backbone of every country’s development, while inviting parents, staff of schools and members of the community to take their responsibilities in the education of the child.

He told the head teachers to secure the benches and didactic materials provided them and the entire structures of their respective institutions.

Hon. Lisinge was accompanied in this outing by fellow MP from Tiko Constituency, who is also a member of the CPDM party, Hon. Fritz Etoke.