National Organization for Manyu Advancement (NOMA) completes the roofing of its multipurpose building. The center has been providing the people of Mamfe town with access to computers and Internet for over 5 years.

Located near Mamfe Town Hall and the grandstand, the center is open to everyone who needs to use computers, check email, browse the web, use instant messaging, Skype or similar voice over IP (VOIP).

According to Emmanuel Bate, a computer technician who services hardware and software for the center, NOMA pays 60,000 francs CFA per month to Camtel for the 256/128 Kbps internet access. The Internet is shared over five Pentium 4 computers. These are really old computers, and they slow down Internet access.

While all computers were occupied by happy users, one client was not able to check email and was frustrated. He left the center and asked his points be credited for later use. Mr. Bate reports that increase in Internet speed to 512/256 Kbs and new computers will alleviate  the slowness. However such increase in speed will cost the center 200,000 francs CFA per month  – that is additional 140,000 francs CFA per month. High speed internet will require fast computers. 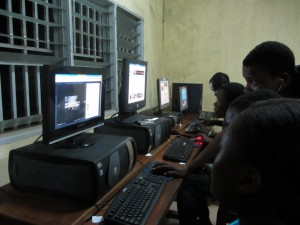 The five computers are for customers to use, and one Pentium 4 stands as server. The server monitors customers’ computer usage and provides internet access and applications to client computers.  The five client computers have 500 MB of RAM each and need to be upgraded to at least 2 GB of RAM with fast processors.  This upgrade will enable users to check email, communicate over VOIP, download images and perform task on word processors, spreadsheets with ease.

The center experiences current fluctuation and frequent electricity outages. There is a generator for backup in case there is electricity outage. However, it requires fuel and maintenance. Mr. Bate suggests that client computers should have uninterrupted power supply ( UPS) to stabilize current and thereby increase their lifespans.

NOMA center needs more than UPS, new computers and high speed internet access. It urgently needs a toilet for its clients and workers.  The roof was recently completed to prevent rain from ruining computers and the structure itself.  Thanks to donations from members, well-wishers, and income generated from the center.  However, the center needs donations more than ever. These funds will be used  to complete the building with a toilet and  upgrade existing computers and Internet access. To donate, download and complete this form located at NOMA’s website:  http://nomamanyu.org/projects.htm, or call NOMA Administrator at (602)-561-4800. Donations are tax deductible.

About NOMA
NOMA, according to its website (http://www.nomamanyu.org), is a nonprofit organization incorporated in the Commonwealth of Massachusetts, with an IRS 501(c)(3) tax status granted.

The guiding principles of NOMA are rooted in the belief that self-reliant development, fair-play, equal opportunity and grassroots empowerment are the engines that will uplift Manyu Division economically and socially.

NOMA’s membership is made up of the sons, daughters and friends of Manyu Division.

Manyu Division, it should be noted, is one of the fifty-four administrative units that make up the Republic of Cameroon.