Reasons Why Tree Planting Is Critical

The Ministry of Forestry and Wildlife and its regional and divisional delegations are working with some council areas in the country and civil society organisations to show that forests play a vital role in the livelihood and wellbeing of the nation. Therefore, there is need to collectively spare no effort in protecting what is left of Cameroon’s forest and regenerate what has been lost.

This is the background of the 2014 launching of the Southwest Regional Reforestation Campaign that took place at the Delegation of Forestry and Wildlife, Buea. 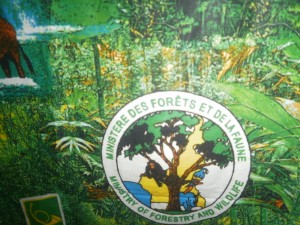 According to Samuel Eben Ebai, Southwest Regional Delegate of Forestry and Wildlife, it is a must for all to be committed in the reforestation exercise across the country, curb the rate of degradation, deforestation and manage forest resources sustainably. He will note that forests provide almost a quarter of household earnings for people living in or near forests, citing the commercial import of Non Timber Forest Products, NTFP, in poor, rural and forested environment.

Ebai indicated that forests are essential 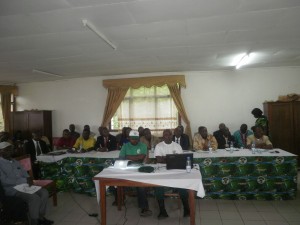 He said tree-based agricultural systems make pertinent contributions to human livelihoods, wellbeing, while maintaining agricultural productivity over the long term and in the face of environmental and climatic shocks. 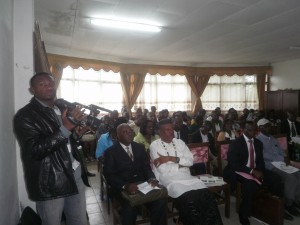 government, annually and contributes to economic growth. Hence, Mayors of municipalities and the NGOs involved in forest management must make tree planting an investment. “We must create plantations for the huge financial benefits that come with them. The Mayors will begin generating income from the plantations in the next five years. The demand for construction in Buea and other towns in the country is high. This goes with wood. There is need for forest regeneration. It is a huge business 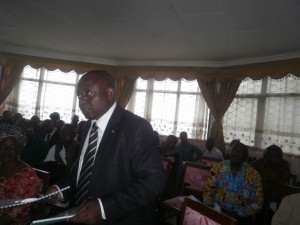 Chief William Ekong Sakwe, Mayor of Mbonge Council, makes a point at the launch of the 2014 reforestation campaign in Buea

The Southwest Regional Delegate of Forestry and Wildlife challenged the Mayors and NGO officials to follow up the trees planted for the exercise to be sustainable. “We will join these stakeholders in what they are doing. That is why the government is not only making available money for the tree planting, the government is also supporting the process of maintenance and follow up,” he said.

Chief William Ekong Sakwe, Mayor of Mbonge Council, one of the seven beneficiary councils for 2014 reforestation activities lauded the support from the Ministry of Forestry and Wildlife, which is coming to salvage a degrading situation in his municipality. “We have four forest reserves with a degradation of more than 70 percent. A lot of destruction has been made on trees out there. The support from the Ministry and funding partners will help us regenerate the forest. So far, we have planted 10,000 trees and we are doing the follow up and maintenance thanks to support from the council coffers.”

An upbeat Sakwe said for the future to be preserved, something must be done now, while cautioning those who have come to stay in his municipality to not only cut down trees but must embrace the culture of getting into reforestation and regeneration.

Mayor of Kumba III Council, John Kona Makia noted that the negative impact of global warming must be taken seriously and so there is urgent need for tree planting to change the climatic conditions. He took a commitment to make the tree planting exercise a business venture for the economic benefit of his municipality and the population.

Some other participants at the meeting proposed that Council authorities should put in place an office for forest experts in their Councils for the reforestation exercise to be professionally carried out.

Earlier, the Secretary General in the Southwest Governor’s office, Clement Fon Ndikum reminded the beneficiary Councils and NGOs across the Region that the financial assistance made to them is money from the state and must be judiciously used. “Immediately get to work and plant trees for 2014. Excuses will not be entertained for non execution, given that we are in the heart of the planting season. And for the Councils and NGOs, who had received money previously for the reforestation campaigns, a team from the Regional Delegation of Forestry and Wildlife is on the way to verify their activities and subsequently report to the Ministry of Forestry and Wildlife,” he said.