Comfort Ebangha Agbor, 4thDeputy Mayor of Muyuka Council indicated that women must make a change and forge ahead from their daily difficulties. “Women must understand that 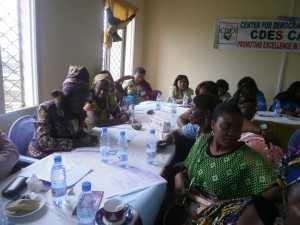 they can also make a contribution where men are. They should be orderly so that their voices can be heard,” she noted. She will add that the girl child must be educated and be included in all debates. 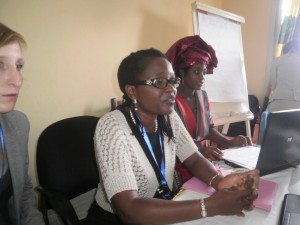 because, when you educate a woman, you educate the nation. At the grass root, you will find mostly the women, who will subsequently relay important information to their husbands and their children. That way, you are changing the nation,” she explained.

Agbor said the debate is not about challenging the men, but giving a voice to the woman.

In a discourse on; Why promote women? 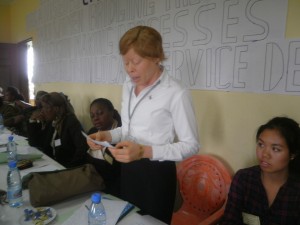 Dorothy Forsac, a lecturer in the Department of Women and Gender Studies, University of Buea said there are plausible reasons to promote women in the decision-making processes. “The democratic principles are clear. A government for the people by the people. We cannot have good democracy when a good chunk of the people is sidelined. Every strata of the population must be represented; gender – male and female. There is no way that democracy can be effective if the female are absent and only the men present. The human rights approach cannot be left out. It is the right of everybody to be heard. So, if women are not into decision-making, then their human right is being violated,” she noted.

Forsac said living out a part of the population in decision-making is dangerous for a country. “That will mean losing vital human resources and development goals.” She will indicate that women have different needs, experiences that only they can talk about. “If women are not into decision-making processes, who will talk about the issues of the women? Even a man that is gender sensitive and wants to help women cannot have the insight. If women have problems with childbearing, no matter the help from the man, it cannot be same since the man has never given birth. Women must be part of the processes if those issues have to be addressed,” she added.

She mentioned some speed brakes on the way of women as they attempt getting to the decision-making processes. These include; cultural barriers, socialisation; upbringing of children in which boys are socialised into leadership roles, while the girls are oriented towards reproduction. “These roles bring a gap between men and women. And in the course, women are not assertive enough. There are cultures that do not permit women in the gathering of men. That way, women will never get access to the decision-making realm.”

Forsac expressed regrets that the changes for women are there but “It is painfully slow. We should start having workshops that will involve men and women. You consciencetise women and do not consciencetise men, it still comes up as speed brake. The women coming on board are helping the country’s development processes and the family, then the men will open up and accept them.”

Project Officer, CDES Cameroon, Carolinda Achanga Oben reiterated that women must be encouraged, following the increasing access to education. “With women competing in the educational sector today, we must give them the opportunity to get access into the decision-making processes. Those already empowered should give the light to the others.”

From the Friedrich-Alexander University in Erlangen-Nurnberg, Germany, Nadine Moritz on internship at CDES said everywhere in the world women are fighting against the dominant structures put in place by their male counterparts, while lauding the government of Cameroon for putting in a place an entire ministry for women and the family. “We still do not have that in Germany,” she mentioned.

Southwest Regional Delegate of Women’s Empowerment and the Family, Juditha Moffah, entreated the women leaders at the workshop to go back and transmit the knowledge acquired to the other women in their respective groups and communities. She decried male chauvinism and gender-bias laws enacted in Cameroon, which contribute in pinning down women.