The Gov’t Has No War against Traditional Medicine – Dr Fru 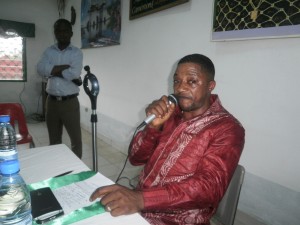 A look of Dr Fru at a press conference in the build up to African Traditional Medicine Day, August 31

denouncing individuals in government circles, who are putting speed brakes to the growth of traditional medicine. He also dismissed talk that there is a cold war between tradi-practitioners and the government of Cameroon.

What is special about the 12th edition of the African Traditional Medicine Day in Cameroon? 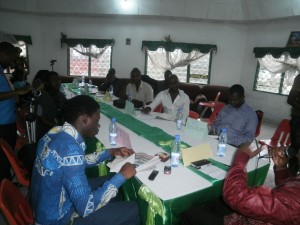 We are coming up with the Institute of Candalogy in Cameroon – The Garden of Eden Naturopathic Institute of Natural Medicine, GENIWA.

What is this institute all about?

We have a lot to offer to Cameroonians, Africans and the rest of the world as far as holistic health is concerned. We are going to train people who are cultured, socially fit and inspired with the knowledge of holistic healing.

How did the inspiration for this institution come about?

I believe it is from the source of life, the master, creator and supreme being of the universe. Our creator, Jehovah God.

How will entrance into this school be organised?

The institute is open to everybody in the society, who have the calling and those who are interested in studying natural medicine. It is open to holders of First School Leaving Certificate to post graduate certificate holders. They will come in and study in the various disciplines in the institution.

For those who are interested, how do they get more information?

We have a website; www.geniwa.org. Google Dr Fru and you will have a lot of information on the internet. Explore the internet and you will get as much information as possible. Our programmes are been giving visibility across media houses in the country. People know where to get the necessary information. In Cameroon, people want to sit at home and breakfast should meet them there. We have to be proactive and go searching for information.

This year’s theme on the African Traditional Medicine Day is on collaboration at all levels with stakeholders in traditional medicine. How is the collaboration unfolding in Cameroon?

Despite the great efforts some traditional practitioners are putting in, there is still the problems of quacks amongst you people …

It is common everywhere. Though government is putting in all the energy and sensitisation for people to get the right conventional drugs, you will still find people selling fake Paracetamol here and there. Even in the religious domain, you find people moving with loud speakers here and there, claiming to preach the word of God. They make noise the whole place and disturb the peace of others. It is same atmosphere in traditional medicine. What we are doing is to minimise quacks, you cannot eradicate them. The question is; who is a quack? It is the society that is better placed to judge who is a quack. From their fruits, you shall know them.

The cold war continues between government and traditional medicine. What is the way forward?

As a tradi-practitioner, what are you doing about the Ebola virus ravaging a good part of West Africa?

Ebola has become a threat not only to the victim but to its master. The whole world is panicking. The Ebola virus has become mad, it has jumped genetical barrier and is now attacking its master. We are working. That is why today, drugs that have not been tested or confirmed can be used against Ebola because it is a threat. We are also working hard to see that we come up with formulae that we are going to use in tackling the virus. I cannot say much, we are yet to detect a case of the Ebola virus in Cameroon but we are working as doctors not only for Cameroon but for humanity. If our brothers in neighbouring countries are suffering from a problem, we should feel for them and come out with a solution that will help them.