The information, communication and technology world is really on the superhighway. The media men and women in Cameroon cannot be left out in the new media that is evolving every day. This is the background of a two-day workshop on “The Use of ICT Tools in Journalism” that took place recently in the seaside resort city of Limbe, Southwest Region of Cameroon. Organised by the Cameroon Association of English Speaking Journalists, CAMASEJ and the US Embassy in Yaoundé, Cameroon, the more than twenty media men 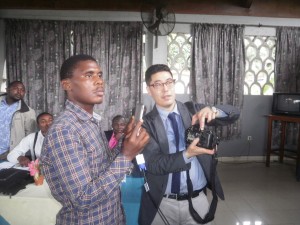 Prof. Takahashi (R) trains journalists in Limbe on how to use ICT tools in journalism

and women practicing their trade in the Southwest Region learnt many new ideas. These include; digital story-telling, multi-media story planning, best practices from digital media companies and evolution of digital media. At the close of the workshop, the facilitator; digital media specialist, Prof. Corey Takahashi, who is also a journalist, multimedia producer and certified YouTube trainer shared some views with Icameroon.com in this exclusive interview. 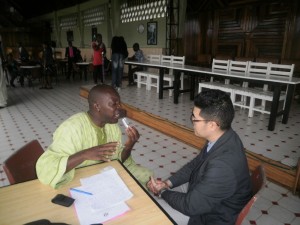 On a tour of Cameroon, which has taken you to Douala, Limbe and Yaounde, what have you been telling Cameroonian journalists about new media?

Everybody is experimenting around the world. You may be doing something serious in Cameroon but we have not done it in the USA because this is not a fixed form of media that is not changing. This is 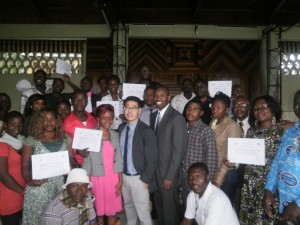 Journalists at a two-day workshop on “The Use of ICT Tools in Journalism” that took place recently in the seaside resort city of Limbe, Southwest Region of Cameroon.

a form of media that is evolving every day.

Why should journalists be interested in the digital media?

The digital media is so accessible. Before, you had the printing press to put out your message, the broadcast TV station, with the digital media, you can go on the internet café and become a publisher.

Specifically, what are the new media you are talking about?

Can we put our finger on this new media on the internet?

They are giving free publishing to individuals and reporters, especially in the US context. Reporters, who work for large media organisation in the USA, still use twitters to promote their stories and reach out to their readers, listeners and viewers. It is amazing that reporters work for big media houses, yet they are seeking help from twitter, face book, YouTube to push forward their stories.

Internet facilities in the African continent and Cameroon in particular are slow. How helpful will the new media be for us?

That is a huge challenge. I see that changing. Think about cars over the years. The earliest car, Maloti was not a fast car. As time went on, technology evolved and the Gashiper and Chrysler have won a larger share of the public. Look at the mobile phones, some twenty years ago, they were only for the rich and the extremely wealthy people. Overtime, look at how the smart phones and feature phones have taken over the global market. Before, you will not think of affording them.

Any advice to Cameroonian journalists?

The internet speed is a big infrastructural issue. It will involve investment and a decision the average Cameroonian cannot influence directly. May be some votes will have to take care of this. Cameroonian journalists should just go on with the capacity they have now. When it will become fast, they will push on. It is coming very soon. Not too far from the future.

Thank you too very much.