Indigenes of Mile 16, Buea Get a Piece of the Cameroon Banana Market

Cameroon produced 250,000 tons of bananas last year, and by 2013, the industry is expected to produce 500,000 tons. Most of the banana is grown and exported to foreign countries. Major players like Cameroon Development Corporation (CDC), Société des plantations du Haut Penja (PHP) and Société des Plantations de Mbanga (SPM) produce banana in large scale for exports. Banana for local consumption is produced by subsistent farmers throughout local regions of Cameroon.  Indigenous farmers and vendors from Tiko, Buea, Mutegene sell their bananas under the Banana Association at “Mile 16 Banana Market” to consumers and resellers. 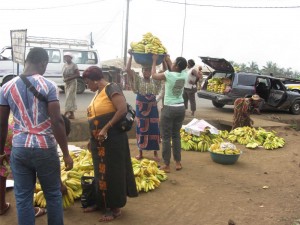 While the local farmers serve their localities, joining the Banana Association help them to reach nationwide clienteles.  It was for this reason they formed the association.    The association exposes members to big customers from the nation’s economic capital, Douala. Members can sell about 10 to 25 bunches a day depending on how fast bananas are ripe. Vendors who sell to local clients make a minimum of 45,000 frs CFA per day, while members who sell to clients in big cities like Douala can make between 200,000 to 600,000 frs CFA per day.

Mrs Sophie Nembo is an inhabitant of the area and a member of the Banana Association. She says, as a pioneer member of the business, buying and selling banners is no longer lucrative as it used to be, because many people have joined the business. She also points out that vendors from Douala come to Mile 16 and buy at cheaper prices. However, when the local venders were directly selling to consumers in Douala, they sold at higher prices.  She, however, added that as a member of the association, she is exposed to big buyers and that helps her business to grow.  To belong to the association, however, each vendor or farmer must pay 50,000 frs CFA.

This is quite expensive to many farmers and vendors. Hence non-members, with no exposure, choose to sell their bananas to the locals. Big vendors with membership and connections buy large quantities and transport their bananas to big cities.

Transportation is essential part of the business. There are special vehicles which transport bananas from Buea to Douala. Speaking to one of the drivers, he says, “It is very challenging because the goods involved are perishable and must be delivered on time.” In effect the vehicles must be road worthy. He also adds that market is best during the rainy season, because during that period, there is a lot to be transported.

While most of the banana produced in Cameroon is exported to foreign countries, the people of Mile 16, Buea are getting a piece of the industry that is expected to grow by half a million ton in 2013.