The Organization for the Harmonization of Business Law in Africa (OHADA) celebrated its 20 years of existence at the Yaoundé Conference Center. The celebration took place on October 22, and it was presided by the Minister of Higher Education, Jack Fame Ndongo, who represented the Prime Minister of Cameroon, Philemon Yang.

During the celebration, the Minister of Higher Education cuts the anniversary cake and declared the OHADA week opened. The week, which is slated for October 22-26, includes an Economic Forum and International Colloquium under one theme: “OHADA at the Service of the Economy and Business.” 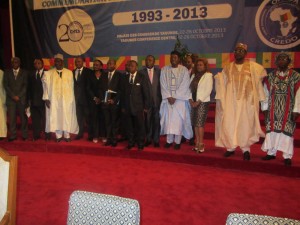 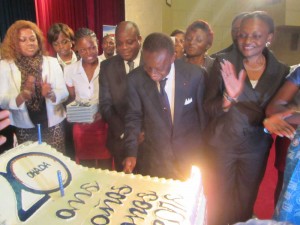 The objective of Economic Forum, according to The Research Center for Documentation and Multimedia (CREDO), the organizer of the OHADA week, was to provide an atmosphere where businesses from different member countries can network and also have the opportunities to meet with foreign investors. The forum also allowed makers of the OHADA laws share their knowledge and findings with attendees since its creation twenty years ago.   The organizers of the forum hoped to see that OHADA legal provisions actually can create value by protecting investments and resolving conflicts promptly if any should occur. 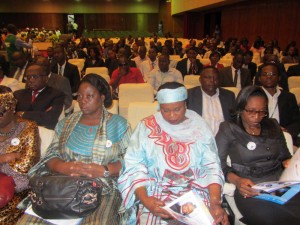 After the Economic forum, the International Colloquium follows from October 24-26. Its purpose is to determine if the OHADA laws are fit to guide, facilitate and enhance sustainable business practices in Africa. Experts, business stakeholders, legal professionals will share their understanding on the impact or role of OHADA laws in economic growth.

With OHADA laws involved in trade, businesses are expected to flourish in Africa.  Professor Sossa said that for 20 years, since the formation of the organization in Mauritius, African states have put collective efforts to make OHADA what it is today.

Sub Saharan Africa now has a different vision towards judicial security and economy by putting in place harmonized business laws and legal rules to govern actors. This has led to the ratification of treaties on commercial transactions, banking and transport laws. The transport laws guide the passage of goods within the member states.

OHADA official website is www.ohada.com. For a complete event schedule, go to http://credo-multimedia.com/20.ans-ohada/.