For some weeks now, the Moderator, Matute Menyoli, of the CRTV Buea Saturday morning talk show programme, “Press Club”, from 8AM to 9AM, has been receiving threats and even death threats. The regular panellists on the programme not left out in the various forms of threats. Tuesday, July 22 2014, there was a new twist at CRTV Buea as a Note of Service of the latter date, signed; Station Manager, David Chuye Bunyui, with reference number 001/22/CRTV/RS/SW,  carried the suspension of the broadcast of the programme “Press Club” on the CRTV Regional Radio Station in Buea until further notice. 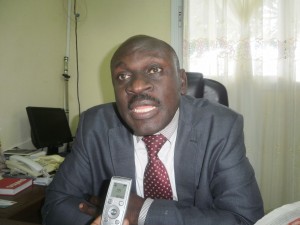 On the heat of what the “Press Club” issue is all about, iCcameron.com conducted an exclusive interview with the Station Manager, CRTV Southwest, David Chuye Bunyui. He explains what the problem is all about, noting that his action is purely professional, while indicating that a Moderator of a programme should bring his or her guest(s) to order if he/she is going out of hand.

Following Note of Service, dated July 22 2014 and signed the Station Manager, CRTV Southwest, David Chuye Bunyui, the programme, “Press Club”, generally described by many as the flagship programme of CRTV Buea has been suspended till further notice. What informed the suspension of this programme?

The programme of Saturday, July 12 2014, which focussed on land in Fako Division, was done in the most unprofessional manner. I was surprised that reputed journalists could allow their guests carry them along. You cannot have guests who come into the studio and refer to people as ‘idiots’, ‘thieves’ and the journalists let go and do not bring the guests to order. You cannot have people who are virtually xenophobic in their declarations and the journalists side with them without bringing them to order. So, the programme was not professionally handled.

We have programmes like Cameroon Calling, Morning Safari, which you are famous, thanks to it, Scene De Presse, which is insightful and Press Hour, which touch on burning issues. They have not been suspended?

Listen to the professional way in which these programmes are been handled. They do not have guests who come to the studio and begin to insult others. No! That is wrong! I handled Morning Safari for several years, we handled serious, delicate issues in a mature manner. You do not bring guests into the studio and allow them say any kind of thing and you do not call them to order. That is not correct! As journalists, as a Moderator of a programme, you should bring your guest(s) to order if you realise that he/she is going astray. If you do not do that, it means you are siding with what the guest(s) is saying. That is not correct. It means you are no longer doing your work as a journalist.

Where you stampeded to take this action? Or is it a judicial action, professional or political hierarchy?

I was not stampeded. Nothing judicial about it! It is a purely professional action. The programme was poorly done and we are going to restructure “Press Club”. We will look into it and make sure that when we bring back the programme, things are done the right way.

What is going to replace the airtime for “Press Club”?

Is the suspension not going to compromise the audience your station has enjoyed over the years?

“Press Club” is not the only interesting programme aired on CRTV Southwest. I do not know if people enjoy listening to insults. If that is what my listeners on CRTV Buea want, then it is regrettable. I am not too sure that is the listenership of CRTV Buea.

When someone who is on the panel goes as far as saying that you Walter Wilson Nana, who comes from the West Region of Cameroon, should not buy and own land in Buea, is that correct? And that land can only be leased to you. Is that right?  That is against national unity, national integration, which the Head of State is preaching every day. We have worked so hard to bring this country together. I think that people should not tear us apart at this time.

As we continue to build press freedom in Cameroon, what is your advice?

Journalists should be responsible. We have fought hard to have the press freedom we have in Cameroon. Some of us have suffered, been to jail and suspended from our jobs. People should not come today and compromise what we have worked for in several years. That is my advice to all journalists; those in the private and public media. We have to be responsible in the way we handle issues.

To your colleagues of CRTV Buea, any message to them?

Knowing the love you have for the profession, are you ready to dialogue with the panellists of “Press Club” for the programme to be better?

Thank you the Station Manager!