The owner of the fishing vessel named Barnaly VI immatriculated L00025/IS/2013 belonging to Ets. CAM SPAIN SERVICES Sarl and the other two belonging to Ets. Manga Paul christened Star Shrimpa 29 and Star Shrimpa 34 respectively have been levied a fine of FCFA 3.5 Million each to be paid in the public treasury. This information has been made public by officials Of the Ministry of Livestock, Fisheries and Animal Industries

According to the Sub director of Fisheries Surveillance in the Department of Fisheries, Aquaculture and Fisheries Industries, Dr. Collins Etah Ayuk, the aforementioned trawlers 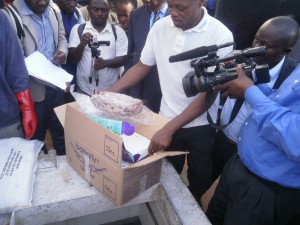 were caught in a recent surveillance mission in the territorial waters of Cameroon off the coast of Tiko, Southwest Region, for not respecting some of the fishing regulations in force.  “We have arrested three fishing vessels; Star Shrimpa 29, Star Shrimpa 34 and Barnaly VI. The first two have the licence to catch prawns in Cameroonian territorial waters but when they do their catch; they do not do their landings in Cameroon. This is against the law that guides the fishing practice in Cameroon. The law provides that they must bring their catch back to 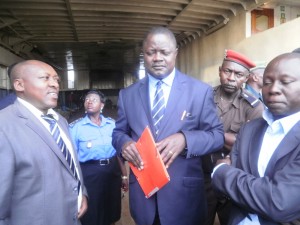 L-R The DO of Tiko, Dr Salle & Dr Etah share views on how to educate fishermen pursue the right actions

Cameroon for the Cameroonian market to also benefit from their catch, pay some taxes to the state of Cameroon before exporting to other countries,” he explained.

Etah said the defaulting vessels failed to respect some of the fishing norms as prescribed by the law, citing the quality of net and the sizes to be used. “The net sizes of the trawlers are small and they do their catch in areas prohibited by the law. We have three nautical miles preserved for production and growth of juveniles. So, when the trawlers come closer and with the size of their nets, they catch everything and if they continue like that, we will not have fish in Cameroon,” he mentioned.

He cautioned the defaulters not to continue fishing now that their licence have been suspended, by the Ministry of Livestock, Fisheries and Animal Industries, indicating that if they do, their fines will move up to FCFA 50 Million and above.

Etah entreated all those involved in the fishing business to comply with the regulations in force, saying unscrupulous individuals and their vessels will not have peace if the laws are not respected. “The surveillance mission in the territorial waters of Cameroon from our Ministry, will continue to do its work in collaboration with the forces of law and order, especially the Marins,” he added.

He will be corroborated by the Southwest Regional Delegate of Livestock, Fisheries and Animal Industries, Dr. Francis Salle, who said the two tons of prawns and ten tons of fish confiscated from the aforementioned trawlers will be sold to the Cameroonian market for any buyer who is ready. “We have to do fishing in a sustainable manner. If not generations to come will not have fish to consume. If those who came before us did these malpractices of today, then we will not have fish. Fishermen have to carry on with their activities according to the laws of Cameroon,” he cautioned.

Paul Manga, resident in Yaounde and owner of the vessels named Star Shrimpa 29 and Star Shrimpa 34 said though he has a licence from the government of Cameroon to do fishing, the persons operating the trawlers in the sea failed to respect the norms and so, he must give in to the punishment from the state.