The Vietnamese telecom company will operate under the name Viettel Cameroun Sarl — a joint venture between Viettel Global and Bestinver Cameroon Sarl. 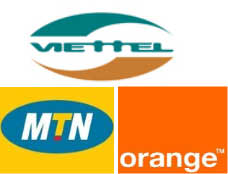 As Viettel embarks to provide 3G network to 81 percent of Cameroon’s territory, it is expected to employ 6,500 jobs in 2013. If this happens, Viettel will become the number one telecom employer in Cameroon.

MTN Cameroon, the largest wireless provider with about 7 million subscribers, employs about 673 employees. MTN International owns 70 percent of MTN Cameroon and 30 percent is owned by the Cameroonian company Broadband Telecom.

Orange Cameroun, with 43 percent market share, is second largest wireless provider. The company had 4.7 million customers in 2011 and employs over 600 workers of whom 99% are Cameroonians.

When Samuel Eto’s Set’Mobile went operational in 2011, it employed 550 workers.  Set’ Mobile is a Mobile Virtual Network Operator (MVNO). The company does not have telecommunication infrastructure but buys minutes from wireless voice providers like Orange, MTN and Camtel – a fixed line data and voice provider but also now provides wireless services to consumers.

In November, SMS Mobility another MVNO launched its operations to provide data services. According to Manfred Tubman, CEO of SMS Mobility, the company intends to provide data speeds up to 2.4 Mbps. With this speed, smart phones and tablet owners will seamlessly connect the Internet and enjoy multimedia Apps.

The industry is growing.  However, 3G networks are very much in need.  According to Pyramid Research, 3G subscribers are expected to reach 5.6 million subscribers by 2017 and will generate $1.3 billion in revenue from voice services alone.

As Viettel Cameroun Sarl and other new companies come into the wireless telecom market, Cameroonians stand to benefit from employment and high speed data and voice commutation services.