The Pendamboko Ferry Through The Eyes of a Reporter

As the Southwest Region braces up to host celebrations marking the 50th Anniversary of the reunification of Cameroon, one of the irrefutable blessings of the union, has been the peaceful coexistence between the people of English and French language backgrounds and cultures.

Even in areas where rivers, hills and other natural geographical features have created barriers, the people, some of whom even share a common language, have very often found means of breaking the “wall”, and consolidating their brotherhood. Such is the role played by the ferry over the Mungo, at Pendamboko. 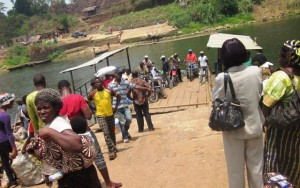 The Pendamboko Ferry on a busy day

The Pendamboko ferry is the main cross-over that links the Balongs in Muyuka, Southwest Region, with the Mungos of the Littoral.

The ferry was constructed and shot to prominence on Thursday July 1 2004, when millions of Cameroonians were stranded, following the collapse of the all historical Mungo Bridge. The ferry thus became more than just a means of transportation, but also a link between both parts of the country, as well as a veritable symbol of national integration.

Run by the Cameroon Development Corporation, the CDC, to serve as a means of movement for its thousands of workers on both sides of the river, the ferry has gone beyond being a means of transportation, to a genuine tool in fostering the reunification ideals. 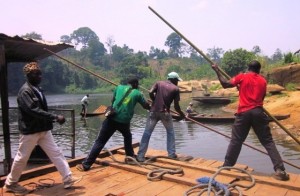 “I have lived and worked here for eleven years. On the Southwest side of the river, we have the Balongs, in Muyuka, and on the other side, Pendamboko, Matuke… it is mixed, but we socialize as one community. On happy, just like sad occasions, family members, friends, and other people move from one end to another to take part.

For instance, the Mungo workers have a union, which involves everybody.

We visit each other for marriages, birth celebrations, funerals this promotes interaction, unity and collaboration amongst us.

Even in terms of tradition, if an accident occurs, and someone drowns in the river, if it is on the Southwest side, a traditional ruler from that part is called to perform the necessary rituals, and vice versa.” Fossang testified. 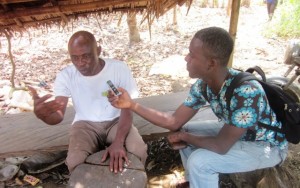 Talking about their work schedule at the ferry, Fossang said two collectors and six operators work in shifts from 6am – 2pm, and from 2pm – 10pm daily, after which they rotate. In terms of revenue, commuters without luggage are transported free, while non CDC vehicles, bikes, and trucks pay a fee, depending on the load.

However, they face enormous difficulties when the ferry breaks down, as one of the operators is put permanently on standby, to remove water from the tank, else it sinks.

Another resident, a CDC security guard, Essene Ayatong Joseph said for the two years he has been in the area, he has not noticed any difference between the two peoples. “We share everything.

It is true that sometimes the bike riders have little frictions amongst themselves, but such issues are quickly resolved. When we have an incident in the river, activities are stopped on both ends, until a solution is found”.

Apart from the CDC plantations that employ a vast majority of the population, (Pendamboko, Matuke, Muyuka), the major economic activities around the ferry include; farming, sand extraction, and other petty businesses like food and drink.