Distinguished personalities in academia, research and medicine have lauded the contributions made by Prof. Vincent Pryde Kehdinga Titanji, Emeritus Vice Chancellor of the University of Buea, UB.

At a recent scientific laudation in honour of Prof. Titanji, organised by his colleagues and former students, led by Prof. Wilfred Mbacham that held at UB’s Amphi 750, the Minister of Higher Education, Prof. Jacques Fame Ndongo, represented by Prof. Sarah Anyang 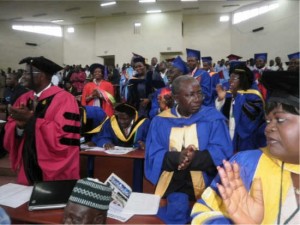 University dons give a standing ovation to Prof Titanji

Agbor, Inspector in charge of Academics in the Higher Education Ministry congratulated the Biochemist, Prof. Titanji, saying it is nice to give honour to whom it is due. “This is the moment to recognise the contributions Prof. Titanji has made to science, humanity and the higher education administration in Cameroon and beyond. He has distinguished himself and he is a model for the younger generation,” Prof. Agbor mentioned.

According to Prof. Agbor, after serving the Cameroon higher education and government for 34 years as a university professor, a researcher, administrator and retired in June 2012, it is better to celebrate eminent academics like Prof. Titanji when they are alive, hale and hearty for their precious contribution to humanity and the academic domain.

While entreating budding scientists to emulate the shining example of Prof. Titanji, the 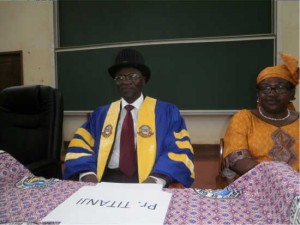 higher education official said his (Prof. Titanji’s) curriculum vitae shows that he is an epitome of success via the virtues of hard work, perseverance and consistence.

She hailed Prof. Titanji for promoting the image of Cameroon’s higher education and being instrumental in the creation of the Cameroon Biochemical Society and other related associations.

Prof. Agbor said Prof. Titanji has made himself one of Cameroon’s foremost academic icon and one of the most celebrated Cameroonian Biochemist, following his deeds. “He is a model of what a university professor should be,” she added.

The UB Vice Chancellor, Dr. Nalova Lyonga invited students of science orientation, those in UB and other universities to continue from where the erudite scholar has ended. “This is a wonderful moment of achievement. UB is making strides everyday thanks to its 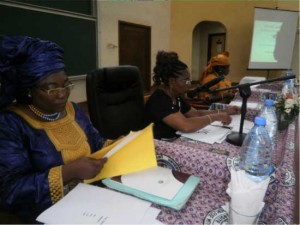 professors and students. People should focus on what makes an institution move into the next century,” she said.

The UB VC described her former boss as a great scientist, a great communicator, a great teacher and selfless. “He has great drives and that have led to excellence in all he does. He is a winner of Bill Gate Grants. It is not given to everybody. The younger generation should learn from him, how he does it, go to him and get his tactics.”

Prof. Rose Leke of the University of Yaoundé I re-echoed the wishes of UB’s VC, saying she has found in Prof. Titanji’s researches the best in many years.

She placed the scholar’s successes on good team spirit and implored the younger generation to pursue from where the retired VC ended. 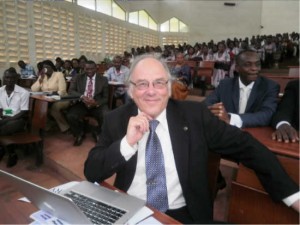 A plethora of tributes poured in from colleagues in and out of Cameroon, national and international associations in the line of Biochemistry.

Prof. Theresia Akenji, Dean, Faculty of Science, UB said Prof. Titanji is a member of many scientific societies and frontline soldier in the fight against tropical diseases and winner of many competitive grants. “He’s an embodiment of hard work and one of the eminent Biologists and Biochemists in Cameroon and beyond,” she noted.

Prof. Wilfred Mbacham of the University of Yaoundé I enumerated the enormous scientific productivity of Prof. Titanji. These include his works on Malaria, Onchocerciasis, Tumour, Tuberculosis, Hypertension, Diabetes and Obesity. “This is the time to let him know how well he has performed and not when he is dead,” he said. “His slate will be full in other areas now that he has more time to himself; his PhD students he is supervising consult for 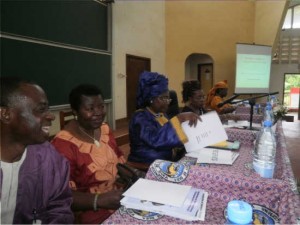 Officials at the Scientific Laudation in honour of Prof. Titanji

international organisations in science and technology and more.”

Another Emeritus Vice Chancellor and Professor, Sammy Beban Chumbow saw in Prof. Titanji a visionary scientist and administrator. “I am happy to induct him into the prestigious position Emeritus Professor,” he mentioned.

Other insightful tributes came in from, Prof. Anders Liljas from Leksand, Sweden, Prof. Paul Moundipa, Head of Department, Biochemistry, University of Yaounde I, Cameroon Bioscience Society, the Fon of Bali, Cameroon Academy of Sciences, the Academy of Sciences for the Developing World, TWAS, International Programme in the Chemical Sciences, IPICS, Sweden, Federation of African Societies of Biochemistry and Molecular Biology and family members.

Reacting to all the comments and flowers showered on him, Prof Titanji said; “Let the 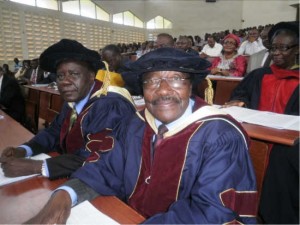 flames of curiosity blaze in our hearts,” he told his colleagues and students. “Even social problems are amenable to scientific concerns,” he added.

He advised that there should be no sterile controversies. “Our interest is to solve the problems at hand with the most efficient strategies. We should make varsity education holistic,” he said.

According to Prof. Titanji, researchers, scientists, scholars, should be compassionate and be sensitive to the people they lead.

He is the brain behind the Titanji Excellence Foundation for the Advancement of Science, Education & Culture, TEFASEC that has been launched in Buea, Cameroon.