Students in the state-sponsored universities in Cameroon have been told to look for solutions for the economic and energy crises rocking the country. The Vice Chancellor, VC, of the University of Buea, UB, Dr. Nalova Lyonga made the request at the opening ceremony of the maiden edition of the Cameroon Students Challenge, CSC, held in  Buea from May 28 – 31 2013.

Nalova said some of the best minds in the state universities, taking part in the CSC, which is a university brain-trust for innovation, should come up with ideas on how to tackle the inadequate power supply in the country, the dwindling economy, the epileptic flow of water in some towns across the country and more. 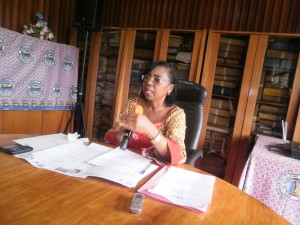 She enjoined the participants from seven of the eight state universities to conduct themselves well, listen to contrary views and make the universities a medium of higher debates. “People should compete from the perspective of innovations so that we can innovate from debates,” the UB VC noted.

She praised the organisers of the CSC, the Foreign and National Press Observatory, known in the French acronym as OPEN, for helping the government organise post 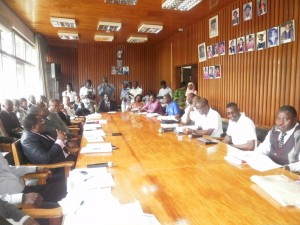 Designed for young people, CSC has three pillars; academic, civic and cultural. It aims at detecting and awarding prizes to brilliant, talented and ingenious students, challenging them on issues and inventions that have an impact on the development of the nation.

According to the Executive Secretary of OPEN, Franҫois-Hervé Moudourou, CSC 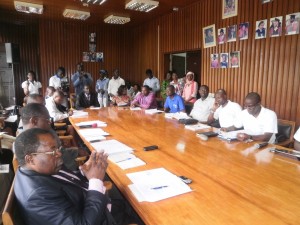 UB and OPEN officials at a press briefing

is a citizen oriented competition with the objective to reinforce the Growth & Employment Strategy Paper, GESP, which is government’s blueprint for Cameroon’s emergence. “We’re out to encourage our students to believe in their country and be part of the development,” he said.

Moudourou mentioned that members of OPEN have being dreaming and it is good for all Cameroonians to dream and make Cameroon big. “Ours is an original idea 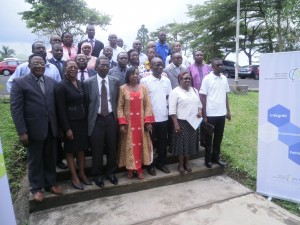 UB and OPEN officials pose for a family pic

and being a citizen think-tank, we’re contributing in our own way to the celebrations building up to the 50th anniversary of the Reunification of Cameroon to be held in Buea,” he added.

Driven by a spirit of innovation and concern for efficiency, the members of OPEN have pooled their skills and experience to benefit Cameroon’s emergence. “We’re an incubator of ideas, a platform for proposals and a catalyst for projects and programmes. OPEN seeks to contribute to the integration, progress and influence of Cameroon and the African continent in general on the world stage,” said Jesse Atogho Ekukole, OPEN’s Deputy Executive Secretary and spokesperson.

Placed under theme; Stakes and Challenges of Cameroon’s Integration & Emergence, the CSC has as slogan; Youths Are Ingenious. This first edition has being patronised by the Ministry of Higher Education and supported by the Ministry of the Economy, Planning & Regional Development, CERDOTOLA, OAPI, Paul Ango Ela Foundation, Banque Atlantique and Guinness Cameroon.

The participating universities for the academic challenge, with four students each are; Universities of Bamenda, Buea, Douala, Dschang, Yaoundé I, Yaoundé II and Maroua respectively.