Teachers and principals of catholic schools in the Diocese of Buea have been give a thumps up for their commitment, efficiency and professionalism as they impart knowledge and wisdom to future leaders of the country and the world. The flowery message came from Rev.Fr. Alexander Nougi Sob, Catholic Education Secretary for the Diocese of  Buea as the education family celebrated World Day of Catholic Schools, recently, at the campus of Regina Pacis College, Mutengene. 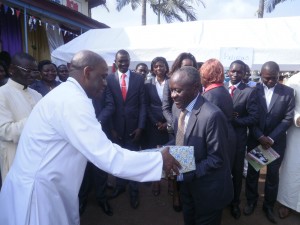 Mgr. Immanuel Bushu, Bishop of Buea(L) receives a gift from the longest serving staff of the catholic education secretariat, Buea

While describing the children placed under the care and guidance of the teachers as angels who are destined to be our precious jewels when we reach the better land, Fr. Sob said the catholic education family of Buea Diocese is celebrating success of their collective efforts and hard work as catholic students, teachers and parents, for opting to believe in the catholic education.

According to Fr. Sob, they are celebrating because they have come a long way, through challenges, which came as 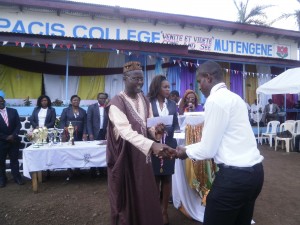 problems to bug them down but thanks to the vision of the author of changes, they have emerged victorious. He will add that they are celebrating the work they do in administration, finance, pedagogy and pastoral.

He said Buea Diocese is beyond excellence as the education family continues to blossom, promising that they will continue to provide quality and integral education to their students. 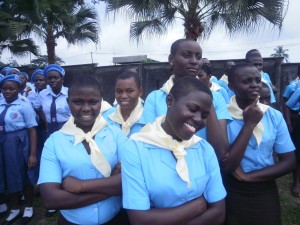 Inspired by this year’s theme of the World Day of Catholic Schools; “Catholic schools as a community of faith in action,” Fr. Sob said catholic schools are faith communities in action, while saluting the teachers for a job well done.

He enjoined the teachers to place their students and parents at the centre of their actions, reminding them and the students to engage into greater efficiency.

Fr. Sob rejoiced that their teachers are 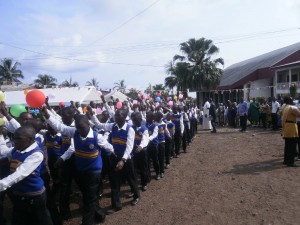 now regularly paid through the banks and given defined contracts, which he explained are fruits of the Koinonia and Kaizen Philosophy put in place by the Bishop of Buea Diocese, Mgr Immanuel Bushu, which is all about continuous improvement and innovations.

The Education Secretary will be corroborated by the Mgr. Bushu, who thanked the staff, the administration and all involved in the chain of caring for students in catholic schools in and out of 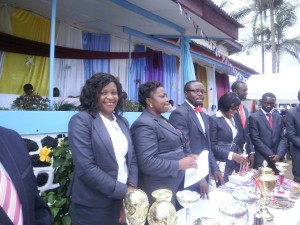 Some staff of the catholic education secretariat, Diocese of Buea

He saw in catholic schools a formation ground for life, which include; education, spirituality, morality and physical fitness.

Gabriel Metuge Njikang, representing the Southwest Regional Delegation of Secondary Education, lauded the good work being done by the Catholic agency and expressed glee for the continuous collaboration between the catholic education family and that of the government of Cameroon.

Njikang entreated catholic colleges to make a difference in moral education, while congratulating them in making the entire education family proud in the Region with their brilliant results in public examinations.

A teacher with the Catholic education family, Buea Diocese, Edmond Sumvi noted with joy that catholic teachers can now cue at the bank to receive their salaries, build a house, drive and own cars, “things which were almost impossible in the past but now they are a dream come true thanks to the ingenuity of the Mgr. Bushu and his close collaborators in the education sector of the Diocese,” he mentioned.

Jacky Paschal, a student of Our Lady of Mount Carmel College, Muea, Buea expressed delight for the celebrations, saying it was an opportunity to make new friends, share views and know new things from  other schools and students.