The September 30 2013 municipal and parliamentary elections in Cameroon have come and gone but the lessons are still lingering around. Inspired by what happened and motivated to look into the future, the Centre for Democracy and Electoral Studies, CDES, Cameroon has been studying and analysing the September 30 twin polls.

Presenting their studies and analysis to journalists recently at their Tiko head office, CDES Cameroon Executive Director, Henry Atem Oben said they composed a mission of 60 well trained observers, drawn from different civil society organisations across the ten regions of Cameroon. “We deployed teams of observers in all ten regions of Cameroon and on the Election Day, the teams visited a total of 448 polling stations,” he noted. 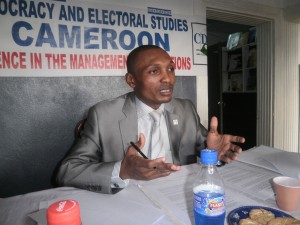 According to the international elections observer and consultant, their mission saluted the recompilation of the electoral register and the introduction of Biometric Voter Registration, BVR, saying the voter registration process was satisfactory, welcomed by stakeholders but did face some challenges and inaccuracies.

Atem, who has observed elections in Ivory Coast, Liberia, Senegal and Ghana mentioned that the BVR improved the process and reduced various forms of electoral misconducts perpetuated in the past. He will indicate that the convening of the polls took many political parties by surprise, while questioning the absence of a detailed electoral calendar in Cameroon. “This made the selection process for candidates by political parties difficult and prompted the use of undemocratic nomination procedures,” he said.

Citing Section 149 (2) of the electoral code, which empowered the President of the Republic to sign two decrees; No: 2013/222 and 2013/223, to delimit and repartition some political constituencies a few weeks to the elections, Atem highlighted the views of some opposition parties, who decried the decrees, saying they were baseless and not taking in account the new demographic presentation of the country as specified by the law.

He saluted the relationship between the media and Elections Cameroon, ELECAM, whereby citizens were aware of the various phases of the elections before, during and after but he will express regrets on the unequal distribution of time on the state radio and television, CRTV and the unequal coverage of campaigns by the state-managed print media house, Cameroon Tribune.

The CDES mission noted the respect of the right to expression and association at all levels of the campaign process but expressed worry on the partial disbursement of campaign funds from the government, which they say limited the mobilisation strategies of the opposition parties to convey and propagate their messages to the electorates.

The mission expressed happiness with the mechanism put in place to assist the old and physically challenged voters exercise their franchise and also applauded the ELECAM Board for taking firm measures with regard to gender in the composition of the various party lists. “Twenty of the forty party lists rejected by ELECAM failed to respect the gender requirement,” Atem indicated.

Atem who has observed elections with the AU, the Carter Center of former US President Jimmy Carter, the National Democratic Institute for Foreign Affairs, NDI and one of the two international
elections trainers in Cameroon, was pleased with the accessibility and location of polling stations, while observing that some polling stations in the northern regions of Cameroon were hosted in the palaces of some chiefs. He also expressed dissatisfaction that ballot papers were found littered along the roads leading to polling stations, which indicated signs of vote buying or intimidation of the electorates.

In their 21-page report, CDES observed that the turnout was encouraging, with over 70 percent, while highlighting amongst their recommendations; the introduction of Biometric Verification Machines, BVM in all polling stations to secure the voting process, the adoption of a single ballot paper to stop intimidation and commercialisation of votes during voting and cutting down on cost, the consideration of early voting for security officers prior to election day, instituting an electoral calendar, the review of the deadline for the submission of candidature files and the need for donors and the international community to increase funding for civil society organisations directly concern with democracy and the election processes.