(EMAILWIRE.COM, February 5, 2015) JEREZ, SPAIN — The EXNESS logo has appeared on the Infiniti Red Bull Racing 2015 Formula One car, RB11, which the team began testing February 1 on the Circuito de Jerez circuit in Spain. The RB11′s unique camouflage test livery made an especially strong impression on spectators.

“The team at EXNESS were really impressed by the new testing livery of RB11. Indeed, it symbolizes the amazing power and energy, which all the Infiniti Red Bull Racing cars are always remarkable for. The first pre-season test has truly inspired us, as have all the fans of the team for the season ahead,” said Petr Valov, director of EXNESS.

The RB11 is Infiniti Red Bull Racing’s first race car to sport the EXNESS logo, which signifies the partnership that began in January 2015. EXNESS became Team Partner following a period of sweeping growth, having achieved its position as one of the leaders in the foreign exchange market. 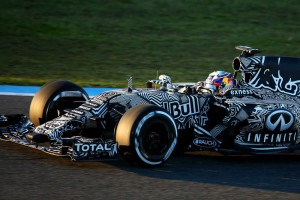 “We are very proud to become a Team Partner with Infiniti Red Bull Racing,” said Valov. “Red Bull and Formula One are two of the strongest and most exciting brands in the world, and our philosophy is very similar to that of Infiniti Red Bull Racing – we are both young teams and very ambitious, and we share the same values of freedom and drive.

“We hope that during this season both EXNESS and Infiniti Red Bull Racing will have many more occasions to amaze.”

Learn more about the partnership between EXNESS and Infiniti Red Bull Racing at https://www.exness.com/infiniti-redbullracing.

This announcement by EXNESS comes after outstanding growth by the company and expansion across the globe. In September, EXNESS’ trading volumes exceeded US$190 billion. Over the past two years, EXNESS has won awards for the best broker in Asia, Russia, the Middle East, and the UK.